Looking into a marriage, with a smile 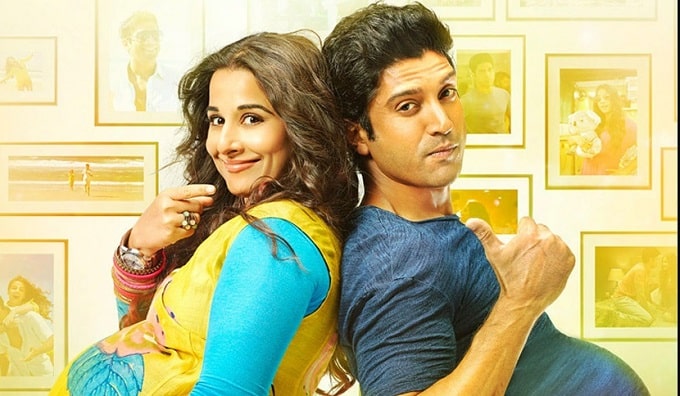 Director Saket Chaudhary raises some pertinent questions on the fake road-signs that could lead to an aborted marriage. Not all of the winking homilies work.

But the film holds together primarily because of the intelligent writing and the sharp and crisp way the two main actors interpret the parts of the two individuals in a marriage that has a lot going for it. That includes a baby girl who arrives just in time to get this seven-year delayed sequel trotting on the right road.

Farhan Akhtar and Vidya Balan look compatible together and give delectably nuanced performances without looking over-rehearsed, and looking so ‘married’ on screen. They come together as a couple that desperately wishes to make the marriage work.

The script is written entirely from the male point of view, and Farhan’s voiceover is a reminder of which side of marriage the script is on.

The film opens with a sequence where the pair plays a tantalising game in a crowded pub to kindle some additional romance into their togetherness. There is a freshness in the way Farhan and Vidya approach this sequence and their roles. There’s a kind of lived-in familiarity with the world of the married couple, and yet played at a detached dispassionate pitch.

The second-half deliberately forfeits the blithe spirit in pursuit of a more penetrating perspective on marital woes. Even when the film loses a lightness of touch, it nonetheless remains even-pitched, preferring understatement to hysteria, thanks to the two principal actors.

Vidya looks great, radiant and expectant as a pregnant woman in the initial scenes; she glides into the zone of paranoid motherhood with plenty of panache.

Farhan is every inch the harried husband here, partly man and partly boy, he’s looking for a boys’ night out without feeling guilty about leaving the wife home with the baby.

Shaadi Ke Side Effects is a cute nugget of a film that tries to be wispy and witty, without getting unnecessarily polemical on the subject of urban marriages.

A warm, funny, thought-provoking take on the man-woman equation, director Saket Chaudhary gets it bang on. The chemistry between Farhan and Vidya crackles and hisses with tantalising tension. Brittle and yet supple, the lead pair’s chemistry irons out the film’s uneven edges. I wish the peripheral characters were written and played better.

Purab Kohi as the nosy neighbour and Vir Das as the boorish manifestation of Farhan’s character’s bachelor fantasies, offer interesting possibilities but stop short of being a support system in this drama of marital discontent.
Nope. You can’t take your eyes off Farhan and Vidya. They look evenly matched and entirely yummy in their yin and yang yearnings.

You do wonder why the script takes them to Australia. But then marriage does make people do strange things, right?