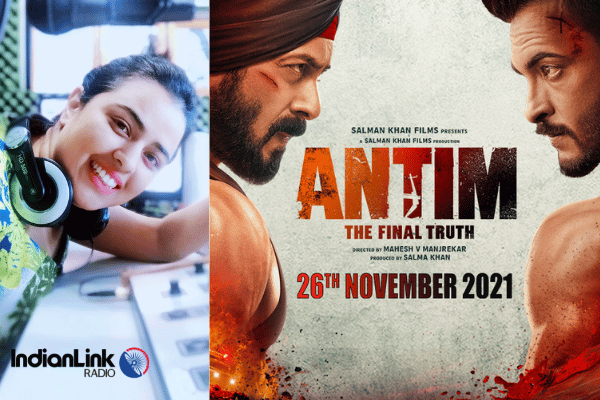 “I haven’t fan-girled like this for a long time!“ Ekta Sharma, Station Director of Indian Link Radio, said after she interviewed Salman Khan recently.

The Bollywood heartthrob has been doing the press junket in the lead up to his new release Antim.

In a 14-year radio career, Ekta has interviewed many figures in the performing arts space.

“Although I was looking forward to chatting with Salman for the first time, I knew he has a reputation of being rather an introverted interviewee. Imagine my surprise when I found him to be quite forthcoming!”

Pleased to be talking to Australia, Salman Khan aka ‘Bhai‘ told his fans to come out and see a  ‘new Salman‘ in Antim.  ‘More realistic and gritty‘ is how he described his role, but added cheekily, that there will be many opportunities for ‘seeti-maar‘.

The interview almost did not eventuate, even after the actor initially agreed.

One cancellation. Not unheard of, given you’re talking about a Bollywood bigwig. Ekta had sat up till midnight, all ready to chat with the star. At the stipulated time, a staff member came on to say, can you hold on for another hour? An hour later, this message came through: ‘Salman can’t make it; he has a severe cold and cough.’

Turns out, he wasn’t untruthful.

When he finally came on the line the next day, he asked if he could do a phono, not a video, as he wasn’t feeling his best, and then proceeded to cough and splutter through his interview.