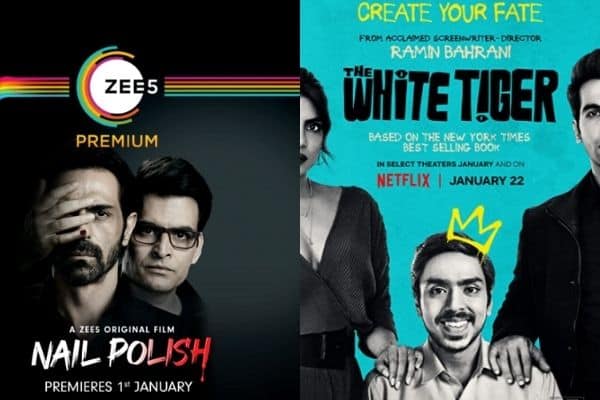 In this courtroom drama, the buried bodies of over 30 children are discovered – who is the culprit? Arjun Rampal plays lawyer Jaisingh who must defend Veer Singh, a man accused of murder. Nail Polish is directed by Bugs Bhargava Krishan while Manav Kaul, Anand Tiwari, Madhoo, and Rajit Kapur round off the rest of the cast.

Kajol is all set to make her Netflix debut with Tribhanga, a social issue drama film directed by Renuka Shahane. Starring Kajol alongside Tanvi Azmi and Mithila Palkar (best known for Netflix series Little Things), the film is about the troubled relationships between three generations of women from the same family.

Tribhanga – Tedhi Medhi Crazy will be available on Netflix from 15 January.

Perhaps one of the most awaited Indian productions on the platform, Netflix’s The White Tiger is an adaptation of Aravind Adiga’s Booker Prize-winning novel. It stars Rajkummar Rao, Priyanka Chopra, and debutant Adarsh Gourav in a dark about the rise of a poor villager to a successful entrepreneur.