Laxxmi, Ludo and more - all the OTT releases to keep you entertained this month. 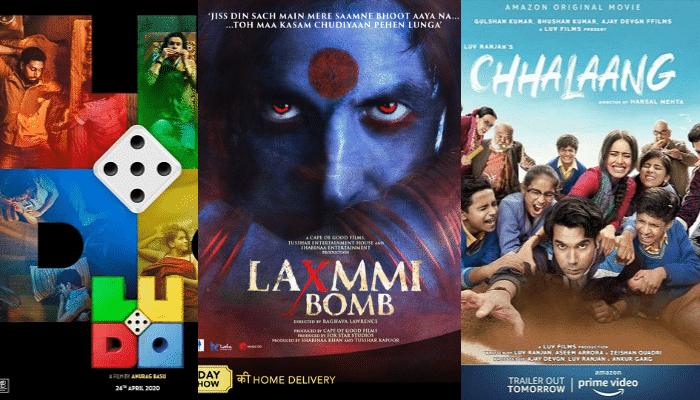 This much-awaited film has definitely made waves even before its release, including a name change and fighting off allegations against transphobia. A Hindi remake of Tamil film Muni 2: Kanchana (2011), Laxmii stars Akshay Kumar and Kiara Advani. It’s about a man who gets possessed by the ghost of a transgender woman and has been one of the most expensive OTT releases yet – the streaming rights sold for a whopping INR 125 crore.

You can start streaming Laxmii on 9 November 2020.

After an exciting trailer release that had everyone on the edge of their seats, Ludo is all set to release this month. With a story about four overlapping stories, including a sex tape and a lost suitcase of cash, the movie promises to be quite the adventure and stars Abhishek Bachchan, Aditya Roy Kapur, and Rajkummar Rao. It’s also narrated by Ludo’s writer-director Anurag Basu.

A black comedy about a nonchalant PT teacher of a school in North India, Chhalaang stars Rajkummar Rao and Nushratt Baruccha in lead roles and is directed by Hansal Mehta (of Scam 1992 fame). It’s also been produced by none other than Ajay Devgn. Before Rajkummar Rao graces our greens in the much-anticipated The White Tiger, Chhalaang promises an entertaining watch as a social comedy.

A suspense thriller based on Atul Satya’s play Ballygunge 1990, Raat Baaki Hai takes place over the course of one night, when estranged lovers end up reuniting under mysterious circumstances after a decade apart. Here’s the catch – one of them is on the run for murder. Starring Paoli Dam, Anup Soni, and Rahul Dev, Raat Baaki Hai was shot in Rajasthan and has been directed by Avinash Das. If you’re looking for a good movie surrounding love and revenge, this might be it!

Who doesn’t love a good romantic comedy? Especially one about an ambitious girl who might love computers and coding more than the boy? Mismatched, as the name suggests, is intended to be a funny look at today’s youth, and their ideas of companionship and love. It stars Youtuber Prajakta Koli alongside Rohit Saraf (of The Sky is Pink) and Roadies’ Rannvijay, and adapts Sandhya Menon’s bestselling novel When Dimple Met Rishi.