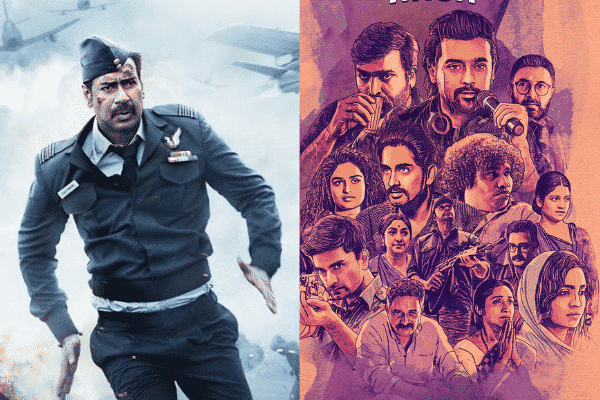 Navarasa is directed by Mani Ratnam and features an ensemble cast including Siddharth, Suriya, Poorna, Gautham Vasudev Menon, and Revathi.

It’s all set to release on 6 August.

Directed by Aanand L Rai (Raanjhanaa, Tanu Weds Manu), this film stars Dhanush, Akshay Kumar, and Sara Ali Khan in a double role. It marks the second collaboration between Rai, Dhanush, and music producer A R Rahman after Raanjhanaa in 2013. The musical drama will also feature a song performed by Dhanush, who many will recognise as the singer of “Why This Kolaveri Di” in 2011.

Atrangi Re hits cinemas on 6 August.

In this fast-paced thriller film, Officer Nikhil (Manoj Bajpayee) receives a threatening call one night that begins the longest, life-changing night of his life. Will he be able to stop the mysterious caller before it’s too late? Directed by Rensil D’Silva, who previously directed Kurbaan in 2009, Dial 100 also stars Neena Gupta and Sakshi Tanwar in supporting roles.

The film premieres on 6 August.

Releasing just in time for Indian Independence Day, this film is about the life of Param Vir Chakra awardee and army captain Vikram Batra, a war hero from the 1999 Kargil War. Siddharth Malhotra essays a double role in this one, portraying both Batra and his twin brother Vishal. The biopic is directed by Tamil cinema’s Vishnuvardhan in his Hindi film debut and co-produced by Karan Johar. The film gains its name Shershaah (lion king) from the code name believed to have been used by the Pakistani army for Batra.

Bhuj: The Pride of India (Disney+Hotstar)

Set during the Indo-Pakistan War of 1971, this film portrays the life of IAF Squadron Leader Vijay Karnik. It shares the real-life story of 300 women from the local village of Madhapur, who helped Karnik reconstruct the IAF airbase from scratch. It’s believed to have one of the pivotal moments that helped India win the war. Ajay Devgn portrays Karnik, joined by big names like Sanjay Dutt, Sonakshi Sinha, Sharad Kelkar, and Nora Fatehi.

Bhuj: The Pride of India releases on 13 August.

In this film targeted at a younger demographic, Abhay Deol takes on his first ‘dad’ role, playing the father of a 15-year-old daughter. His daughter Rhea Kumar (Avantika Vandanapu) aspires to be a DJ, while exploring her identity as a young Indian-American. Will she be able to convince her father of her dream? Spin is also directed by Manjari Makijany, who recently directed Netflix’s Skater Girl.

Spin drops on Disney+Hotstar on 15 August.

Spotted any of your favourite Indian comedian yet? In this weekly series, some of the country’s most popular faces unite for some stand-up and sketch comedy. They’re divided into four teams: the Lovable Langoors (Amit Tandon, Rytasha Rathore, Aadar Malik, Samay Raina), Naazuk Nevle (Mallika Dua, Urooj Ashfaq, Rahul Dua, and Rahul Subramanian), IDGAF Iguanas (Sumukhi Suresh, Rohan Joshi, Sumaira Shaikh, and Tanmay Bhat) and Gharelu Gilaharis (Kenny Sebastian, Kaneez Surka, Aakash Gupta, Prashasti Singh) and hosted by none other than Prajakta Kohli (who was last seen in Netflix’s romcom series Mismatched). Could we ask for any more?

READ ALSO: Vir Srinivas, 20, wins at Cannes with debut film Orders From Above