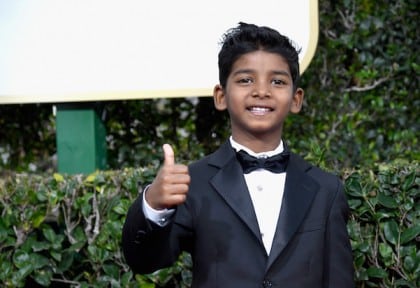 Indian child actor Sunny Pawar, who made his debut in Lion, reveals secrets from the set


Child actor Sunny Pawar who made his debut in acclaimed Hollywood film Lion said that he enjoyed filming in Australian cities and developed a great bonding with his co-actor Dev Patel.

“Although we shot in Bhopal and Kolkata I loved shooting in Australia. The place was so beautiful. There were so many places to roam and play, we went there after shooting and I loved the place,” the young actor told IANS.

Sunny, a Year 3 student at Air India Modern School, Kalina, lives in a slum with his parents and two young siblings in Mumbai. He went through an audition to bag the role.

“I went to the audition where they gave me some lines and asked me to say them looking into the camera. I did that, and then I got to know that I am selected for the role,” Sunny said.
Recalling the first day of the shooting, he said, “Director sir just asked me to run, and I ran! No, I did not feel any pressure of facing camera or shooting first time.”

While the film received six Oscar nominations for the 89th Academy Awards, little Sunny has already has bagged Grand Jury Prize (Special Mention) at the Asia Pacific Screen Awards and he is very thrilled about the fact that he walked the red carpet wearing a black suit like his “new friend” Dev Patel at the Golden Globes in Los Angeles.

As the shooting went on for more than a year, though he found it little tough to manage study and acting both, Sunny enjoyed the process throughout.
Sunny said, “After the shooting Dev and I would play cricket and would goof around on the set. It was so much fun.”
Was there a language problem?
“No, there was no language problem. Dev spoke to me in English, and I spoke back in Hindi.”
The young Ajay Devgan fan would like to continue in films. “My teachers congratulate me and they encourage me to study. I want to act, but I like my studies too. Mathematics is my favourite subject.”
–IANS
- Advertisement -
Share
WhatsApp
Facebook
Twitter
Linkedin
Previous articleUni Break
Next articleA tournament of yesterdays