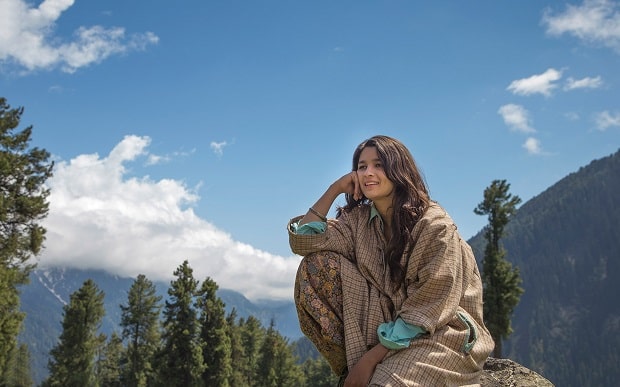 Film: Highway
Starring: Randeep Hooda, Alia Bhatt
Director: Imtiaz Ali
Rating:****
Being in the world this enchanting film inhabits is like being in the state of a waking dream. The world is fatally flawed. But it’s also beautiful in spite of the deep flaws, or maybe because of them?
Imtiaz Ali’s new intriguing work takes us into the heartland of India, much in the same way that Jab We Met and to a lesser extent Rockstar did. Imtiaz loves his India. With all its gigantic contradictions, anomalies and aberrations.
And Veera, the arresting protagonist of Highway, is an anomaly herself. Alia’s performance nails Veera with a persuasiveness that belies her two-film old history. Veera is a girl ridden with complexities and contradictions. Wealthy and spoilt, in a superbly staged highway drama, she is kidnapped on the eve of her wedding by a hood, played by Hooda with his habitual clenched intensity.
The rest of the narrative is pretty much in character with what we expect in a film that constructs its wistful fable out of the harsh reality of the ailment known as the Stockholm Syndrome. Going by the book of “How To Fall In Love With Your Kidnapper”, Veera promptly falls for her scowling kidnapper whose associates (played effectively) conveniently fall off the plot’s radar to leave the lovers alone.
Whether Veera genuinely feels a love or whether that love is born out of defiant rejection of the life of luxury and affluence, we will never know. As played majestically by Alia, Veera appears to be a bundle of snarled contradictions, some compelling, others purely annoying.
At times we feel she is doing what she is doing and behaving in that gratingly headstrong manner only to get even with the life that she wants to leave behind.
Highway is riddled with ironies, not necessarily intentional. Veera falls in love with Mahabir’s angst-laden past, but is aware she has no future ahead with him. A responsible director can’t be accused of glorifying a life of crime. Hence in the end, the entire premise of the love story, constructed with painstaking intensity, falls apart all of a sudden, leaving us with a sense of emptied-out expectations.
But the journey, while it lasts, is exhilarating and even inspiring. No Bollywood filmmaker shoots the Indian heartland with the aesthetic affection of Imtiaz Ali. On this occasion, he has cinematographer Anil Mehta to capture the sand and the snow, the angst and the ecstasy in enrapturing welters. Mehta is the magician behind the film’s textured feel.
No other actress could have played Veera with such infectious passion as Alia, who breathes fire and life into every moment of her screen time. Luckily, she is there almost across the entire length and breadth of the narrative imbuing the canvas with tender glory and slender strength.
A lot of the film’s blemishes – for example, the predictability of the plot and the rather strained attempts to introduce an element of grim social realism, are covered up by the sheer spontaneity of the main performance.
Matching Alia’s fearless portrayal is the director who steals up into her darkest secrets and then allows the character to smell the air’s freedom in a world where the stench of decadence is a given. You can’t escape corruption and violation except when thrown together with someone who is as violated as you are. This is what Veera’s tale of road romance seems to say.
In some vital ways, Highway resembles Gyan Correa’s Gujarati masterpiece The Good Road. One sequence where the kidnap victim helps her kidnappers to escape detection by the police at a check-point on the highway is almost inter-changeable in the two films.
In Correa’s film you could empathise with the child protagonist’s growing attachment to the truckers. In Highway, it’s really hard to be one with the wayward Veera’s heart.
Randeep Hooda is in fine, if somewhat typecast, shape. Though his accent is distracted from his performance, the character’s pain made itself apparent through its mawkish mother-fixated past-history.
It’s tough if not impossible to make a politically correct film about a rich girl falling in love with her kidnapper. To a very large extent, Highway manages to travel a credible road, letting the sleeping dogs lie by simply believing in Veera’s truth (for whatever it may be worth).
Admirably, Imtiaz Ali is not afraid of silences. The sound design by Resul Pookutty is rich in the sounds of nature. The bubble of the brook, the chirp of a bird, the groan of a tired soul and breaking of a heart, are all tangible. A special mention must be made of the texture of incidental noises on the soundtrack and the quality of the folk songs that play in the background as Veera and her kidnapper traverse a spectrum of cultures in search of… what??? We really don’t know!
At the end, we are left with a deeply dissatisfying film whose very incompleteness lends a sense of beauty to the narrative.
SUBHASH K. JHA