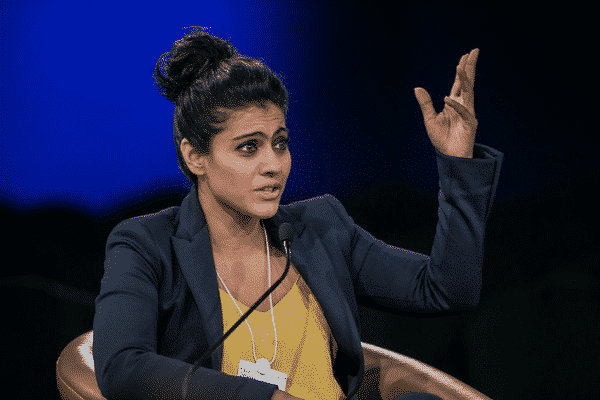 The very talented Kajol (perhaps better known as DDLJ’s Simran or Kuch Kuch Hota Hai’s Anjali) ranks high on any Bollywood buff’s list of favourite actresses. She speaks candidly, never hesitating to make jokes and tease anyone, including herself!

Of course, she’s also known to ruffle some feathers along the way, making her Bollywood’s darling rebel.

On her 46th birthday, we look back at the best Kajol cameos in some of our favourite film songs. Blink, and you might miss her!

Not appearing until 4 and a half minutes into the song, Kajol’s a quick little surprise in this 2003 hit. Many might not even remember her appearance, but we remind you – when Shah Rukh Khan and Karan Johar collaborate, Kajol’s sure to be around.

Rekha, Priyanka Chopra, Urmila Matondkar, Malaika Arora… and of course, Kajol! Deewangi Deewangi brings together some of our favourite Bollywood stars under one roof, and if you’re looking out for the birthday girl, keep your eyes peeled 5 minutes into the song.

Of course we love jiving along with the Bachchans and Preity Zinta, but Kajol’s presence just elevates this hit. At 2:47, just in time for the piano breakdown, Kajol makes her special appearance, grooving in a stunning pink saree.

Directed by Kajol’s brother-in-law Anil Devgan, Haal-e-Dil might have flopped in the box office, but it did give us one good thing – bringing together the husband and wife duo on the big screen. A little after the 2 minute mark, watch Kajol and Ajay Devgn dance in this little-known cameo.

This film’s noteworthy for a bunch of reasons – it’s Karan Johar’s first and only feature without SRK, and marks the debut of Alia Bhatt, Varun Dhawan, and Sidharth Malhotra. In this addictive track, Kajol (and Farah Khan) join them on the dance floor in special appearances. You’ll find Kajol at 2:47 minutes into “The Disco Song”.

“Phir Milenge Chalte Chalte” showcases SRK’s mild-mannered character Surinder wooing many Bollywood actresses with his dance moves, but it starts with the iconic Kajol. Their black-and-white themed dance sequence, including Bollywood’s favourite prop of umbrellas, is surely one for the books.

Bollywood veterans on a comeback spree