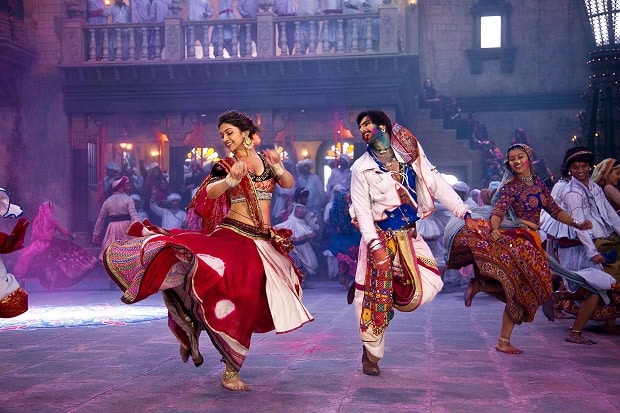 Just when you think you have seen it all, there comes a film that reminds you of how far the cinematic medium has come… And how far it can go in the right hands.
Let’s face it – Bhansali is Bhansali. The visual imagery in all his earlier films – from Khamoshi: The Musical to Guzaarish is comparable with the best art from any field of aesthetics.
In terms of its free-flowing, unmeasured and operatic opulence, Ram-leela (with or without the censorial prefix), comes closest to the giddy high-pitched and yet miraculously controlled tempo and tenor of Bhansali’s Devdas. That too was a steeply sensuous cinematic adaptation from a literary source.
Ram-leela goes to William Shakespeare’s Romeo and Juliet and comes away with a marvel of a tale of love-at-first-sight. Bhansali tilts his hat to mythology, folklore and the culture of community clashes with a blend of spontaneity and brilliance.
The rigorous reworking of the Shakespearean classic required a certain sense of recklessness. Earlier this year, we saw some of the same creative recklessness in two other Bollywood adaptations, namely Aanand L. Rai’s Raanjhanaa and Manish Tiwary’s Issaq.
But in Ram-leela, every image and frame tells a story.
Bhansali’s Romeo and Juliet are unabashedly sexual in their body and verbal language. None of that traditional coyness and hesitation that characterises traditional courtship when Ram and Leela discuss one another’s vital statistics. He runs a porn video parlour. She comes from a family of gun-wielding criminals helmed by a steely matriarch (Supriya Pathak, brilliant). He comments on her ‘136 inch’ chest, she talks about his, er, trigger. They are in love and they know lust is an integral component of their relationship.
No two lovers derived from a classic romance have celebrated their mutual sexual desires so frankly and fearlessly.
Gosh, these two are Romeo and Juliet on steroids! And this is as good a place as any to tell you that no other two actors could have done to Bhansali’s Romeo/Ram and Juliet/Leela what Ranveer and Deepika have done. They don’t play the two characters. The couple owns their characters.
In his quest for the most visually invigorating shots, Bhansali is here assisted amply by his cinematographer Ravi Varman. Varman uses the camera like Ustad Amjad Ali Khan uses the Sarod. It’s an instrument to converse with divinity. Wasiq Khan’s art work too unfurls a spiralling tapestry of kaleidoscopic colours that find a place in the hectic frames without jostling or crowding the canvas.
Of the innumerable imperishable images that emerge from the film’s tumultuous tale of overnight passion, elopement, estrangement and reunion, I’d single out two. The first shows Barkha Bisht as Ranveer’s widowed sister-in-law running away from a gang of attackers. As she runs through the rugged hinterland, her brass vessel tumbles down-slope with her.
The sequence, caught in a desperately dying light, is probably the most vivid image of impending doom I’ve seen in any recent film.
The other unforgettable image features Deepika, her hand bloodied after an injury, lying on the wet ground in a streak of blood. It reminded me of Aishwarya Rai’s slashed wrist creating a pond of blood in Bhansali’s Hum Dil De Chuke Sanam.
Fire and blood are never far from Bhansali’s vision. Though there is plenty of bloodied images in Ram-leela, the fire this time rages in the eyes of the characters.
Bhansali’s self-composed songs assisted by Monty Sharma’s evocative background score, perfectly capture the film’s impetuous mood.
The actors do the rest. Every performer surrenders to the tempestuous saga. While Supriya Pathak leads the supporting cast with a stellar performance, Richa Chadda, Abhimanyu Singh, Gulshan Devaiah and Sharad Kelkar are the portrait of pitch-perfect emoting.
As for the Ranveer-Deepika pair, there’s some great on-screen chemistry there!