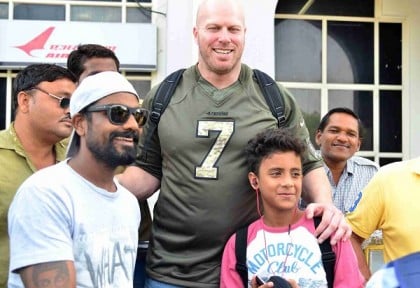 Director Remo D’Souza has roped in Australian actor Nathan Jones for his upcoming film A Flying Jatt, starring Tiger Shroff and Jacqueline Fernandez in the lead roles.
Tiger plays a superhero in the film, and Remo says he always wanted a ‘super-villain’ like Jones. The two are perfect opposites, exactly as intended.
“Look at the difference as they stand together,” he said at the trailer launch recently.


Nathan Jones, the 7-foot tall actor, is also a champion wrestler, strongman and powerlifter.  He was last seen in the $150 million blockbuster Mad Max: Fury Road, and you might remember him from Troy, starring Brad Pitt.
He also starred in the 2015 Tamil film Bhooloham  and will be seen in Bahubali 2.
Tiger says he enjoyed working with Jones. “The action scenes were a treat do! He is very powerful, but he is also a thorough professional.”
The film is slated to release on August 25.
- Advertisement -
Share
WhatsApp
Facebook
Twitter
Linkedin
Previous articleHappily ever after
Next articleLittle girl with the big heart