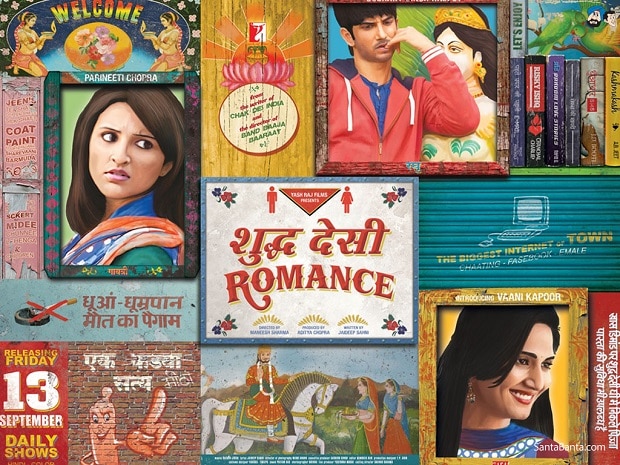 While watching light-hearted love stories also known as ‘rom-coms’, two reactions come to mind: ‘What next?’ and ‘Who cares?’ This annoying film, masquerading as a modern-day parable on ‘What Young People Want’, definitely falls into the ‘Who cares?’ category.
The three main characters are so confused about life, sex, love and commitment (in that order) that you wonder why a film was scripted about them and their annoying lives in the first place. The ‘hero’, if he can be called that, is not only commitment-phobic but impervious to any kind of gravity in life.
Don’t misunderstand. He takes himself very seriously. But it’s hard to take him seriously as he vacillates between two women, both equally absurd in their libertines’ apparel borrowed straight out of some stale Julia Roberts-Susan Sarandon film which probably got shelved because the hero ran away with the cameraman.
Shuddh Desi Romance is so contaminated with candour, it doesn’t realise the difference between being sincerely searching and artificially scandalous.
Jaideep Sahni has written some remarkable films in the past, but sadly this ranks as his worst-written endeavour to date. The film has only three main characters, one of who is employed solely in slipping in and out of the two women’s lives.
Shuddh Desi Romance is not the kind of film that obtains or even seeks a decent resolution. The plot is happy to let the protagonist Raghu stew in his own orgasmic juices.
And he is plainly horny all the time. The over-zealous Sushant Singh Rajput as the hero doesn’t even try to hide his hard-on, wearing his libido like a badge of honour and flaunting his carnality in front of the two ladies. They, for reasons best known to them, seem to enjoy his company after an initial bout of demurral.
It is baffling how a protagonist as low-life and sleazy as Raghu can attract two attractive, feisty, free-willed women. Or why they would encourage his advances when they know he thinks only with his …well, to use a term Rishi Kapoor uses with such endearing picturesqueness…pappu in the pants.
Pappu in the pants has rollicking time. Curiously the hero and his horniness are like two different entities in the film which simply celebrates, for want of a better term, low-life libidinousness.
Raghu, as played by Sushant, comes across as a wimpy womanizer and nothing more than an irksome skirt-chaser.
The two women are more interesting, as always. Especially Parineeti Chopra whose dumbly defiant, smoking, swearing, character Gayatri acquires some stability through her fearless embrace of the camera space. No matter how frustratingly ill-conceived Gayatri’s rebellious attitude may be, Parineeti owns up to the character’s weaknesses like a man.
Debutant Vaani Kapoor plays her very awkwardly-written character with a mysterious smile that suggests it knows something that we don’t. Not that we care.
Most of the principal actors barring Rishi Kapoor give over-rehearsed performances, projected as laboured casualness. Rishi Kapoor as the wedding caterer is the exception, sinking his teeth into his role. The self-defeating numbing verbosity of the three main characters in this lust-triangle do nothing but speak about their pathetic self-limiting world. Soon we feel like reluctant eavesdroppers in an ill-managed ménage a trois.
Flat and phoney, the self-conscious realism of small-time gender-equations in Shuddh Desi Romance leaves us untouched, unamused and cold.
Live-in relationships never felt less inviting.
Subhash K. Jha