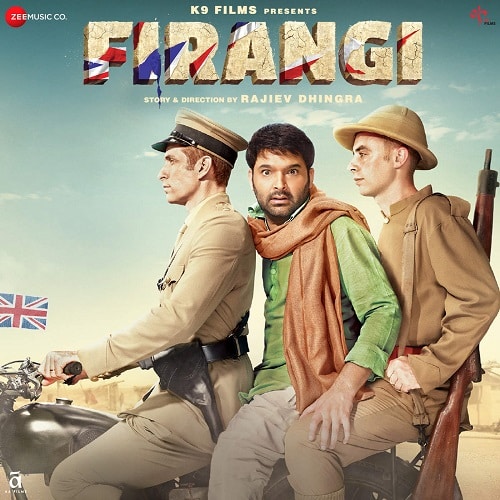 In his second – and far superior to the first – outing as a feature-film star, Kapil Sharma has a special skill.
He kicks ass. Literally. With one foot in the butt, he can heal the most stubborn backaches.

It doesn’t take long for the curious British officer – yes, Firangi is set in the colonial Raj – to hone in on our hero Manga’s unique talent. The rest of this wildly enjoyable pokerfaced comedy has a lot to do with how Manga uses his talent to get his way with the Gora Log.
First things first. Firangi is an original and frequently clever take on the tricky relationship between the colonizers and the colonized. And though Kapil Sharma is no Aamir Khan and this is no Lagaan, Firangi often careens audaciously towards making a complete fool of itself but pulls back just in time.
Take a bow, then, Kapil Sharma. And his director Rajiev Dhingra for a film that offers the elementary pleasure of cinema that relies on simplicity artlessness and a humorous candour to glide across a well-executed colonial saga where the British are not barking tyrants and the Indian peasants are not always the doe-eyed oppressed innocent creatures we want them to be.
For a film that aims only to alchemise British India into primal entertainment – and succeeds in doing so – Firangi displays a great eye for visual detail. From the clothes and mannerisms of the British characters to a matchbox with the British flag painted on it, Shabana Kannnam’s art direction and Rashid Rangrez’s production design are top-notch.
Throughout the lengthy but never dull narration, the director employs an offhand tone, that suggests we don’t take the quirky colonial saga too seriously. But look closely. You will see the film leaves nothing to chance. From the attractive songs and the eye-catching authentic locations in rural Punjab to the absolutely delightful supporting cast, Firangi gets it right in the bright light.
Every cameo of the villagers in revolt against the local British ruler (Edward Sonenblick, playing the white oppressor with some arrogance and some compassion) is well-etched. Kumud Mishra as buffoonish royalty sucking up to the Britishers represents a very true chapter of history from British India when princely states sold themselves out to the British. Inaamulhaq as Kapil’s pal has to run around in a bridal outfit for the climax while Anjan Shrivastava as a Gandhian freedom fighter must project righteousness without seeming pompous.
Those who think Kapil’s days are numbered should make it a point to see what unrehearsed energy he brings to even the most mundane conversation about a bar of soap.
And guess who makes a very special appearance at the end? No, it’s not Sunil Grover.