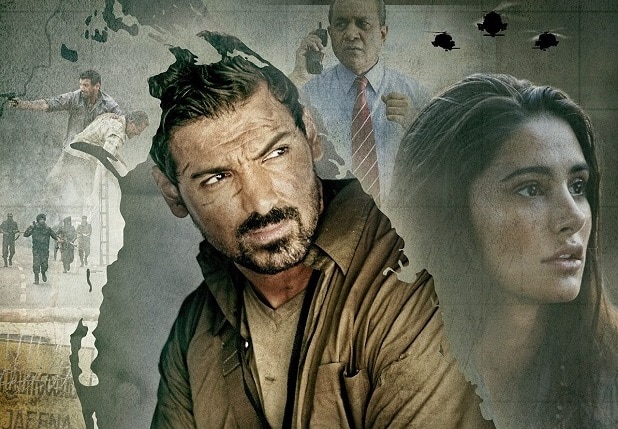 Film: Madras Café
Cast: John Abraham, Nargis Fakhri and Raashi Khanna; Director: Shoojit Sircar
Rating: ****
If only history could be changed by art. Cinema is a powerful medium for socio-political expression and revolution. Alas, in India, entertainment engages all other aspects of life on celluloid.
But seriously, it’s time now to get off the Chennai Express and get into Madras Cafe for a cup of the compelling. We need a reality check. And we need to regain a sense of history in Bollywood cinema which seems lost in the hoary art of streetside tamasha, glorified and aggrandised by cinematics that are perceived to be the elixir of pop culture.
It is time for mainstream entertainment to grow up. Heightened realism is a means to achieve a synthesis of fantasy and history in this deftly scripted semi-fictional account of the processes leading to Rajiv Gandhi’s tragic assassination in 1991.
The trenchant script, co-written by Somnath Dey and Shubendu Bhattacharya, attempts and succeeds in building the same spiral of pseudo-history that Oliver Stone built in JFK. I feel Indian politics, because of the country’s multi-culturism, is far more complex than its American or European counterpart. Our cinema tends to dilute, simplify and trivialise history because we are much too wary of and lazy about getting involved.
Not Shoojit Sircar. Not Madras Cafe. Not John Abraham. What a courageous producer and actor John has proven himself to be! More of that later.
But first the plot.
Let me say right away, that to understand the enormity of the story told in Madras Cafe, the audience ought to be familiar with the violent history of the Sri Lankan civil war. But even if you don’t know that thousands of Tamilians died in the war of separatism, it is no sweat off the screenplay’s back.
Tucked away in the compelling creases of the plot is a terrific thriller about the assassination of a prime minister, who, let it be known, is not named in the film. Nor are the LTTE (Liberation Tigers of Tamil Eelam), Prabakaran and the other key players. But then this is India. Here, secrecy and stealth are the founding fathers of any political expose.
But you can’t escape the clutches of history’s tyranny. Sircar’s skilful weaving of fact and fiction leaves little room for scepticism. We know as we watch with helpless astonishment, that the ‘Prime Minister’ will die, that the hero in this case won’t be able to save him.
Such are the heroes in real life. Unsung, sizes smaller than life. John Abraham skips into the part of the RAW agent Vikram Singh with an ease and comfort of a natural-born secret agent. If James Bond or for that matter Kabir Khan’s Tiger were to have any truck with real-life politics, they would have been as believably brave and as credibly heroic as John in this film.
Every actor seems to take a cue from the vast resources of authenticity at their disposal. Specially riveting is Prakash Belawade as John’s associate, who seems to drink hard to escape from the enormity of his compromise. Even Nargis Fakhri, so self-consciously affected as Ranbir Kapoor’s doomed soul-mate in Rockstar, nails her war correspondent’s part with her radiant presence. But I have a quibble with her character Jaya. Why does Jaya speak in English while Vikram answers in Hindi?
The linguistic puzzle never quite obstructs the devastating drama of war violence conspiracy and betrayal. These are dramatic points of political reckoning. And yet Sircar keeps the proceedings subdued and low-key. It’s a miracle how Sircar’s narrative voice never gets shrill even when the occasion is so ripe for over-statement.
Much of the credit for the tonal correctness of the narrative must go to Kamaljeet Negi’s brilliantly unadorned cinematography, which locks in on stunning visuals of violence and espionage-related action without falling into the mistake of making the frames look prettier than the grim situation that they are meant to capture.
Sircar’s editor Chandrashekhar Prajapati imbues a documentary style to the footage. But the sense of cinematic expansiveness is retained in the way the camera moves through the characters’ restless lives, searching for positions of comfort in a situation laden with desperate anxiety.
There’s a whole lot of stifled drama in Madras Café. When a key character dies in the second-half, the tragedy is handled without fuss. John’s tight-lipped performance gives the film a sense of tragic grandeur. We constantly feel we are in a territory where drama has no place. The soundtrack is exceptionally honest. Shantanu Moitra’s background music underscores every scene without hammering in the emotions.
Madras Cafe is a dark deep and satisfying film about the politics of separatism. The film doesn’t take sides. If it is against anything, it is the culture of violence that nations often feed into neighbouring countries for their own gains. This film opens up the hitherto unexplored genre of political drama in Bollywood.
After Vicky Donor, we know Sircar is comfortable exploring innovative cinematic territory. Here, he tells an edgy disturbing provocative but rational and fair-minded story that takes mainstream Bolywood cinema kicking and screaming into a new horizon.
This is cinema signifying a coming-of-age with unforgettable visuals and drama and a rousing mature career-defining performance by its leading man.
Get off the train, baby. This is arguably the best political thriller that Bollywood has so far given us.
Subhash K. Jha