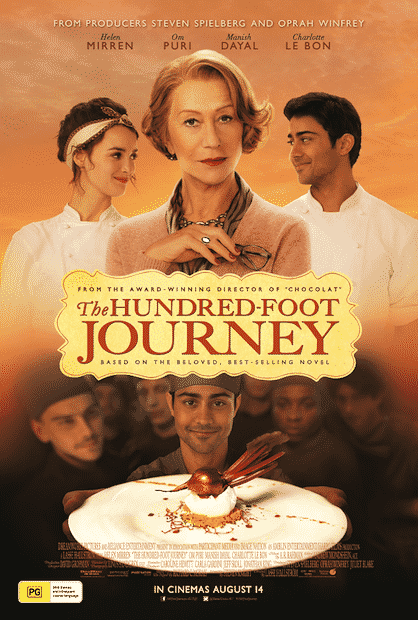 Take one highly praised debut novel, add powerhouse producers and a director with a passion for culinary delights. Stir in beautiful countryside settings, a soundtrack from a Bollywood great, and an appealing cast, and you have the recipe for The Hundred Foot Journey.

Swedish director Lasse Hallström, who took chocolate lovers on a sensuous journey of delight in his film Chocolat, brings us a charming, if somewhat predictable, romantic comedy with a message about hope and learning to get along.

Taking some liberty with the narrative from the best-selling novel by Richard C. Morais, the movie is a culture clash between the chaotic, vibrant ethos of India and the prim, sometimes uptight, world of provincial France.

After the death of his wife, Mumbai restauranteur ‘Papa’ Kadam (Indian movie veteran Om Puri), uproots his family to Europe, where they eventually settle in a quaint little village in the south of France. The picturesque locale is the ideal place for the family to open their Indian restaurant, Maison Mumbai.

The two restaurants are worlds apart and soon a war breaks out between a determined Papa Kadam and the formidable Madame Mallory. It’s a battle of wills where if you can’t handle the heat, you better get out of the kitchen!

Co-produced by Hollywood powerhouses Steven Spielberg and Oprah Winfrey, the film stars the enchanting Manish Dayal as Papa’s grown son, Hassan, who wants to further his culinary talents beyond the family’s Indian recipes.

As the clash between Papa Kadam and Madame Mallory escalates, so too does Hassan’s passion for French haute cuisine and his desire for Madame Mallory’s sous chef, Marguerite (Charlotte Le Bon).

Cinematographer Linus Sandgren works hard to make food another character in the story with lingering shots over chicken curries, beef bourguignon and other tasty delights.

The film is not ground-breaking, but each step of the way, despite the lack of suspense, you’re rewarded with a cheerful story, along with enough humour and beautiful scenery, to keep you satisfied.

The film does lose its way about halfway through, when the culinary creativity is backgrounded for the weaker, predictable romance plot between the younger characters, and there is some cultural stereotyping, but Mirren and Puri are pure joy to watch.

While admirably presenting a message that clashing cultures can find common ground and learn to live side by side, at times the film is a touch too sweet and lacks the balance of a well-seasoned dish.

But with a fantastic soundtrack by A.R. Rahman, and a heartfelt story about a migrant family coming together and building a life for themselves by relying on their hard work and talent, this film is undeniably charming.

Despite being a bit too long and treading a well-worn path, The Hundred Foot Journey is a movie full of heart. It reminds us of the comfort that food, family and friends can bring to our lives.