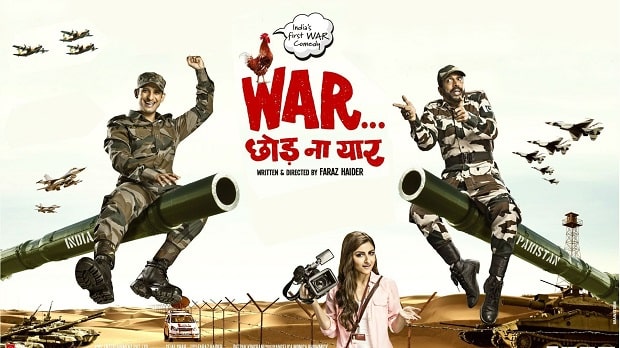 Political satires are easily the most difficult genre of comedy in cinema. They have to serve up a telling lesson to self-serving politicians, while providing audiences with a good laugh. We had Kunal Roy Kapur attempting one of ‘dose’ in The President is Coming.
But that’s it. Full credit to writer-director Faraz Haider for going into the war zone and emerging from the battle-scarred scenario with his sense of humour intact.
War satires are extinct in a country that takes cross-border matters dead seriously. Though War Chhod Na Yaar is a very one-sided view of barbed-wire offences, it does nevertheless fire some mirthful missiles at politicians on both sides who make mileage out of the mythical animosity between the two countries. In the middle of the crackling tension of Indo-Pak differences, there suddenly comes the cackling sound of loud laughter breaking the eerie silence of the desert-scape where ammunition is aimed at both ends.
Sitting in No Man’s Land across the barbed fence are the two squadron leaders from both ends played smartly by Sharman Joshi and Jaaved Jaffrey playing cards, exchanging jokes and making light of one another’s country’s ongoing burden of being border-line belligerent. That the film is shot in the Rajasthan deserts serves the film’s locational purpose creating a battleground realistically, if not opulently.
Faraz Haider has scripted a plot that tickles borderline tension. There are passages of breezy bantering between Joshi and Jaffrey. Both actors possess subtle acting skills that they put here to potent use as two army-men who bond across the border even as war escalates overnight. The soldierly bonding over the barbed wires is a heartening thought, not quite executed with the finesse that, say, JP Dutta would have invested into his border-line satire.
War Chhod Na Yaar is a film with a large heart. ‘Hate war, not the warrior’ seems to be the subtitled slogan of this anti-war satire. Rather than taking long shots of battleground images mercifully, the debutant director goes easy on the gunshots and preaches to focus more on the personal interaction between soldiers from both sides. The cross-border antakshari culminating in the Pakistanis crooning “Yeh mera India, I love my India” is a cleverly designed episode, though much too obvious an effort at taming the enemy.
Then there is a sequence where Indian soldiers unleash a poultry of roosters across the barbed fence to trap their opponents.
Barb re barb!
The problem creeps into the blithe narrative when the Pakistani army men and politicians are shown largely as bumbling imbeciles, if not outright jokers. Dalip Tahil’s triple role as the Pakistani president, the Chinese premier (whose native tongue is translated into Punjabi in Navjot Singh Sidhu’s voice) and the American President’s Yankee-accented aide, ceases to be funny beyond a point.
Not that this sort of stand-up comedy material renders itself effectively to cinematic laughter in the first place. Nonetheless, credit must go to the writer-director for attempting to show the utter futility and the underlining farce that define cross-border aggression.
Some episodes in the film are neatly written. The actors add a layer of conviction to the satire. The underrated underused Sharman Joshi puts up a convincing show as an Indian soldier trying to keep his and his army’s spirits high in the face of violence. Why don’t we see more of him? Jaaved Jaffery, who was effective as a snarling villain in Besharam, puts up another bravura act as Sharman’s colleague from the other side of the firing line. Soha Ali Khan as a television journalist modelled on Barkha Dutta (not again!) gets into the satirical spirit with ease.
The film has a vast cast of comic performers. But I must make special mention of Mukul Dev as an Afghani infiltrator, who gets it wrong each time. Mukul’s accent and comic timing are fodder for the funny bones.
Very rarely do we get a chance to smile about the grim reality of war. This film gives a nimble twinkle-eyed satirical slant to the scourge of war. Warm and well-packaged with intelligent performances, War Chhod Na Yaar flounders when it abandons the human aspect to get into the nuclear zone.
Then it’s time to groan.