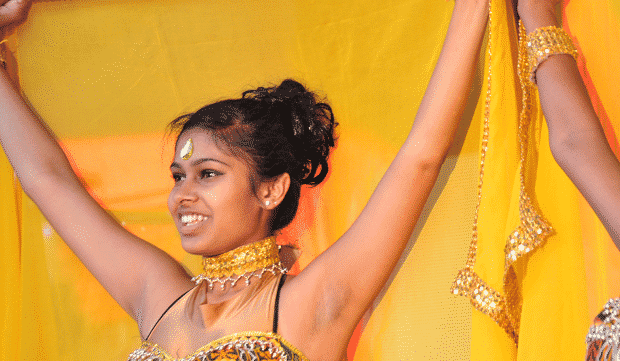 So you want to book a Bollywood act for your next fund-raiser. Try Ramona Lobo’s Sirens Dance Group (www.sirensdance.com.au) who will enlighten your guests about the not-so-subtle nuances of Bollywood dancing and have them screwing in that light-bulb like experts.

One of Bollywood’s leading choreographers, Shiamak Davar has chapters of his dance company in major cities of the world. Shiamak Davar Sydney may have opened only recently, but they’ve already won the heart of the city’s Indian community.

And if you want to understand the lyrics of that Bollywood number, or just want to learn how to say Hello in our language, or what Jai Ho! really means, you’ll want Hindi lessons. Give Mala Mehta a call at the Indo-Australian Bal Bharatiya School (www.iabbv-hindischool.com). Hello Namaste! She’ll have you nodding your head sideways in no time.

Speaking of Bollywood, we know you’ve seen Bride and Prejudice, Bend It Like Beckham, Monsoon Wedding and Slumdog Millionnaire. But Sydney’s very own Bollywood expert Anupam Sharma will tell you, these are not really Bollywood films, they are merely posing as Bollywood films! Bollywood films are those that are made in Bollywood, er, Mumbai, and have an impossibly impossible story that will make you laugh and cry and despair and feel hopeful all in one hour, do that very same circle again in the second hour, and again in the final third! Get out there right now and see Dhoom 3 at your closest Hoyts cinema or better still, on IMAX – the latest Bollywood thriller might still be on as we go to print, inching closer to that record Rs 600 crore mark (A$ 108,480,000) in one month.

Bollywood music, anyone? Try Indian Link Radio, Australia’s only 24-7 Hindi radio station easily accessible on our website or downloadable as an app for your smartphone.