A queen bows out 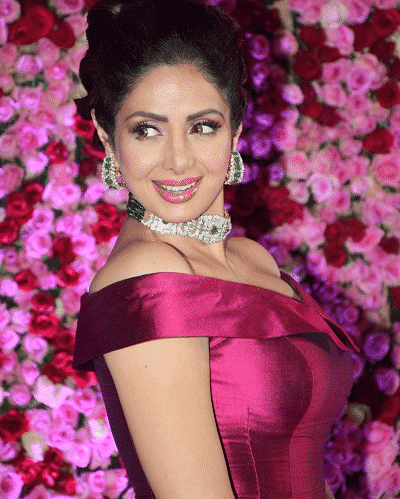 Reading Time: 3 minutesAs I write this, I know that back in Mumbai, preparations are on for Sridevi’s antim yatra. Even days after the news of her death, I am still coming to terms with the fact that the cinematic icon who I grew up adoring, is no more.

I have replayed in my mind the times spent with my sister dissecting every Sridevi act after each of her movies. The spontaneity, the impeccable acting, the ultimate dance moves, the comedic turns. Those eyes spoke volumes, the mischief in her smile could make anyone’s heart skip a beat, and her very presence on-screen could give any male superstar a run for his money. In a male dominated industry she held her own, at times taking home a bigger pay packet. Yes, she was the first ever ‘female superstar’ of Hindi cinema.
Of course we also spoke of Jaya Prada along with Sridevi: two contemporary competing forces during their prime, both beautiful, powerhouse performers and great dancers. In their famed rivalry, the two really pushed each other to become better at their craft. But what made Sridevi stand apart was her versatility, especially when it came to her mastery over comic timing and even action.  From playing a retrograde amnesiac in Sadma, to a contrasting double role of a coy vs a happy-go-lucky girl in Chaalbaaz, to getting into the skin of a ‘nagin’ in the insanely popular snake-woman film Nagina, to the ultimate romantic in films like Chandini and Lamhe, Sridevi nailed every character with her ‘range’ of acting prowess.

Fiercely private in her real life – and a known introvert often called an interviewer’s nightmare – it is inexplicable how she flowered in front of the camera, bringing every role to life in a seemingly effortless fashion. As a broadcast journalist back in Mumbai, I still remember, what an uphill task it was to get a Sridevi byte, let alone an interview.
Starting at the tender age of four, Sridevi got to rule the Tamil, Telugu, Malayalam and Kannada film industries both as a child artist and as a lead actor.
Her foray into Hindi films kickstarted with the 1979 film Solva Sawan but what catapulted her to instant fame in the north was the 1983 film Himmatwala and its kitschy song-n-dance number Naino mein sapna, sapno mein sajna. Her body of work kept expanding and so did the diversity in the choice of characters that she took on. Here was yet another star from the south, destined to rule the Hindi film industry after the likes of Rekha and Hema Malini.

The other ‘range’ in Sridevi’s acting career was the generations of heroes she was paired opposite: Kamal Hassan, Jeetendra, Amitabh Bachchan, Rajesh Khanna, Rishi Kapoor, Anil Kapoor, to Salman and Shah Rukh Khan and Akshay Kumar right up to Adil Hussain, Nawazuddin Siddiqui and Akshaye Khanna.
With her 2012 comeback film English Vinglish, Sridevi proved yet again that she was born to act.
The last we saw her on screen was in Mom (2017). And the last we will see of Sridevi will be as herself in SRK’s forthcoming Zero, directed by Aanand L. Rai.
Summing up the enigma that was Sridevi?
Na jaane kahaan se aayi hai, na jaane kahaan ko jaayegi? Deewana kise baanayegi ye ladki?
We know the answer to that last question: an entire nation that will never cease to love her.

Priyanka Tater
Priyanka Tater is a Radio Presenter, Producer and Freelance writer with the Indian Link Media Group. She has more than 14 years of extensive combined experience in radio, television, and marketing and a lifelong passion for travelling.