Why schools should compile and publish NPS.

The tiresome gloating by schools about the proportion of their students who get top ATAR bands, can easily be remedied by having schools publicly report their Net Promoter Scores.

If you haven’t heard of it before, Net Promoter Score or NPS is a metric used in customer experience programs. It measures the loyalty of customers to a company, based on their responses to one simple question:

How likely is it that you would recommend (Organisation X/Product Y/Service Z) to a friend or colleague?

First used in 2003, the NPS is now implemented by millions of institutions and businesses to monitor how they are perceived by their customers.

We are suggesting here that schools should ask their leaving cohort the question:

How likely are you to recommend this school and its services to a friend or colleague?

This would provide balance to promotions about a school’s top ATAR bands by using a statistic inclusive of the whole school instead of those few most publicly valued and lauded.

To calculate the NPS, the percentage of detractors is deducted from the percentage of promoters. This means that if 10% of all respondents are promoters and 20% are detractors (with 70% being neutral) then the NPS can actually be negative. Across privately run educational enterprises the score is said to vary between about 30% and 70%.

However, this is not the metric for mainstream schools. Survey Monkey determined the global benchmark across 150,000 organisations to be +32%. Schools do not have any NPS benchmark against which to assess them.

READ ALSO: Why students find it hard to write 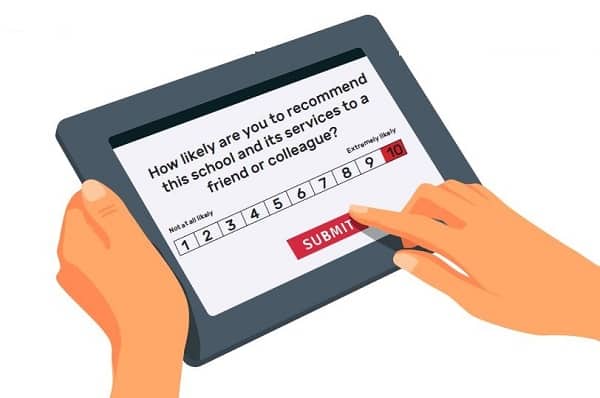 Why schools should measure their NPS

Used in mainstream education, this metric could be extremely useful for several reasons. Firstly, simply compiling this metric requires that schools reach out to each and every student, and also the student’s family. Since some students and their families are virtually invisible, this alone would be an important first step in more fully engaging with the school community.

Related to this is something that every single teacher knows. When you have had contact with a student’s parent or guardian, the awareness of that student in the class is heightened. This is the first step in improving student outcomes if students have been unnoticed.

A third reason as to why the NPS should be compiled is it gives evidence about community sentiment. Rather than school leaders and teachers assuming that students and families are happy on the basis of selectively reported ATAR results, the NPS would be a metric that could add important insight into what the leaving cohort really feels. If schools are serious about evidence-based interventions – this is a simple form of evidence that could be extremely useful.

A fourth reason as to why the annual NPS score should be measured is that it would indicate what those NOT achieving the highest marks and bands think. That is, whether they feel supported, guided and valued as much as those who are publicly badged as representative of school success. This aspect is crucial, as in any system or institution, when viewed from the eyes of those most vulnerable or marginalised there is always capacity to improve and make meaningful differences.

Why school NPS data should be publicly reported

If schools are serious about supporting ALL students, then I believe they should welcome the opportunity to use NPS scores, or some version of the same. However, as NPS data for regular schools is fairly scant, we cannot yet know what a ‘good score’ is (and what is not) in mainstream education. This fact should alarm parents who seek to make informed decisions about their child’s education. It should also concern educational bureaucrats who could use this data as evidence in part to help determine how best to support those students most disaffected in schools.

However, once NPS scores are measured and reported – as publicly as schools promote the highest achievers – we will have a broader basis for meaning accountability.

READ ALSO: How to engage with your child’s school

Leading by exam: Why we need examination reform