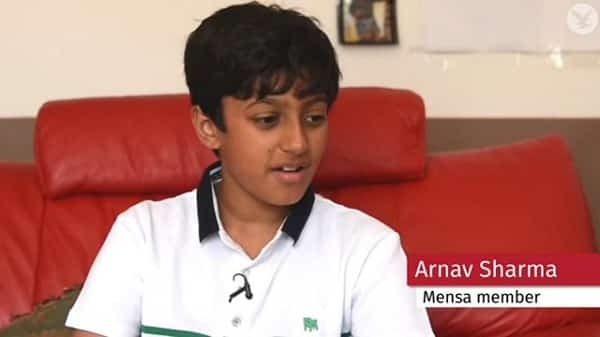 11-year-old Arnav Sharma from southern England scored 162 in the Mensa IQ test — the maximum possible result you can achieve on the paper.

An 11-year-old Indian-origin boy in London has scored 162 in the prestigious Mensa IQ test, two points higher than geniuses Albert Einstein and Stephen Hawking.
Arnav Sharma, from Reading town in southern England, passed the infamously difficult test a few weeks back with zero preparation. Mensa IQ test was developed in Britain to form an elite society of intelligent people, the Independent reported.
The “genius benchmark” is set at 140 and Sharma gained a score of 162 — the maximum possible result you can achieve on the paper.
His mark in the exam, which primarily measures verbal reasoning ability, puts him in the top one percent of the nation in terms of IQ level.
“The Mensa test is quite hard and not many people pass it, so do not expect to pass,” Sharma told the daily.
Sharma said: “I had no preparation at all for the exam but I was not nervous. My family was surprised but they were also very happy when I told them about the result.”

The boy’s mother, Meesha Dhamija Sharma, said she kept her “fingers crossed” during his exam.
“I was thinking what is going to happen because you never know and he had never seen what a paper looks like,” she said.
Sharma said his hobbies are coding, badminton, piano, swimming and reading. He also has an unusually good geographical knowledge and can name all the capitals of the world.
A spokesperson for Mensa praised the 11-year-old boy, saying: “It is a high mark which only a small percentage of people in the country will achieve.”
Mensa was founded in 1946 in Oxford by Lancelot Lionel Ware, a scientist and lawyer, and Roland Berrill, an Australian barrister, but the organisation later spread around the world.
Its mission is to “identify and foster human intelligence for the benefit of humanity”.
-IANS