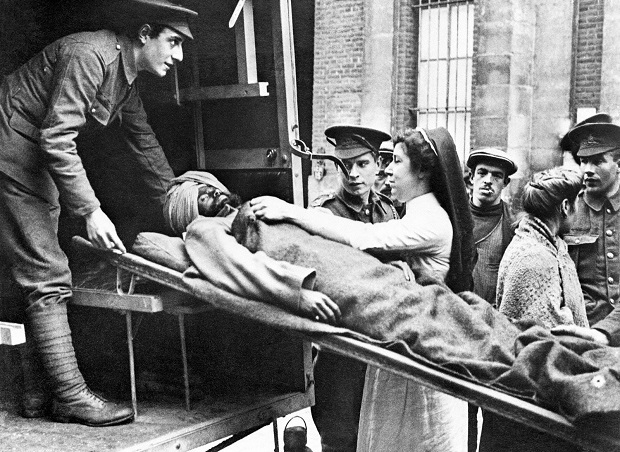 Reading Time: 3 minutesIt is a little-known fact that undivided India was the largest contributor to the war effort among all British colonies a hundred years ago

If Gallipoli was one of the most disastrous campaigns in British military history, it also had some unbelievable victories thanks to the Gurkhas, after whom a feature in Turkey is still named to this day. Shedding light on the campaign, Robert Rhodes James writes in Gallipoli (1965):

On the night of May 12th-13th, there had been a brilliant example of what could be done with effective co-ordiantion between the Navy and the Army when the Gurkhas captured a heavily entrenched promontory which dominated Y Beach and Gully Spur…. With cruiser Talbot and destroyer Wolverine in close support, the Indians stormed and captured the position, henceforth known as Gurkha Bluff – with relatively trivial casualties.

(The Indians were observed then by the young Captain W J Slim, who would go on to become the 13th Governor General of Australia. He wrote as Field Marshall many years later, “[At Gallipoli] I was so struck by [the Indians’] bearing in one of the most desperate battles in history that I resolved, should the opportunity come, to try to serve with them. Four years later it came, and I spent many of the happiest and, from a military point of view, the most valuable years of my life in the Regiment”. He served with the 6th and 7th Gurkha Rifles in India).

A poignant passage in the 1945 book Martial India by F. Yeats-Brown reveals the heroism of the 14th Sikh Battalion at Gallipoli:

In the highest sense of the word, extreme gallantry has been shown by this fine battalion… In spite of these tremendous losses, there was not a sign of wavering all day. Not an inch of ground gained was given up and not a single straggler came back. The ends of the enemy’s trenches leading into the ravine were found to be blocked with the bodies of Sikhs and of the enemy who dies fighting at close quarters, and the glacis slope was thickly dotted with the bodies of these fine soldiers all lying on their faces as they fell in their steady advance on the enemy. The history of the Sikhs affords many instances of their value as soldiers, but it may be safely asserted that nothing finer than the grim valour and steady discipline displayed by them on the 4th June has ever been done by the soldiers of the Khalsa. Their devotion to duty and their splendid loyalty to their orders and to their leaders make a record their nation should look back upon with pride for many generations.

The SA authorities, currently reviewing their decision, must surely be acquainting themselves of these and other aspects of the Indian involvement at Gallipoli.

Perhaps they will also listen to historian Peter Stanley, who has described their ruling as “outrageous”.

According to Prof. Stanley’s research, “India had its 29th Infantry Brigade there and they suffered casualties equally as bad as the Anzacs”.

He adds, “Indian troops not only landed with the Anzacs at Gallipoli but were a crucial part of the supply lines at Anzac Cove where they made sure food and water was kept up to the Australian troops”.

Prof. Stanley is set to release his book on the role of Indian soldiers at Gallipoli shortly.

Meanwhile, his research collaborator at the University of Technology Sydney, Burcu Cervik Compiegne, is also planning an event entitled “Gallipoli Alternatives”, to focus on alternative stories on the White-Australian version.