The 27 year old Indian American shares her experiences from the Biden-Harris campaign. 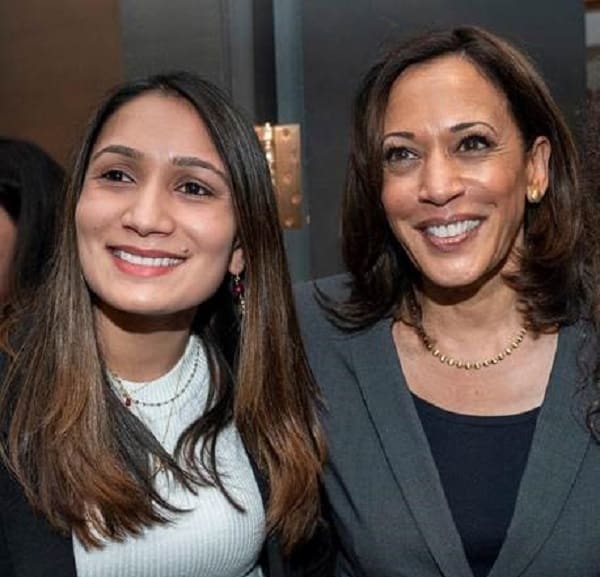 Emboldened to take action in an era of heightened political polarisation, racial unrest and an uncontainable pandemic, young Indian American Mitali Modi talks here about working on the Democratic Party’s political campaigns to tackle the issues that plague the United States.

Growing up in New York, Mitali cut her teeth in political campaign work while volunteering as a high school and college student. Working on political campaigns for Democratic Party candidates came next, with Mitali taking on opportunities with campaigns for Hillary Clinton, Kamala Harris and Joe Biden. Currently, the 27-year-old’s personal passion is reserved for redefining the future of women and minorities in the USA.

You first became involved in serious political volunteer work in 2016.  How did the presidential election that year affect your work and focus for the 2020 cycle?

When Hillary Clinton lost the election in 2016, it felt like the apocalypse. I personally felt like there was so much more I could have done to prevent that from happening. We asked ourselves how we would recover from this loss. It was just so exhausting to do work and not see progress.

A lot of times in the United States, elections and politics are seen as spectator sports but they actually require everyone’s involvement. We sit around and think other people will figure it out. But when a crisis happens you realise that you need every single person to participate. So that was my mentality going into the 2020 cycle.

During the election campaign in 2020, it felt like a life-or-death situation with the pandemic and economic situation becoming out of control for everyday working class Americans and minority communities, and that was the focus.

When did you start working on Kamala Harris’s campaign?

I started working with Kamala’s team in May 2019, but I supported her campaign even before she announced she was running for president.

When I met Kamala at events, it was amazing to see how on TV she looks like a giant, but in real life she is only 5’’2. Her power and presence are so strong that you don’t even realise. She is the perfect politician for this time in US history because she is very present, a good listener and understands how high the stakes are. She’s uniquely positioned to represent communities who have been unheard historically.

Did Trump’s attempts to win the Indian American vote impact your campaign efforts?

Trump did the Howdy Modi event which had a big turn out, but in general, Indian Americans are a very solid voting bloc for the Democrats. In 2016, there was an 83% swing for Clinton, and over 80% for Obama in 2012.

Indians in India are very different from Indian Americans, and what I felt differently in this election cycle was that people in India were pro Trump because they thought he would be better for India but I questioned what that was based on.

For me, I was born in India but grew up in the USA, but I look for more in my president than just someone who will just be good for India, because India is one of the most powerful countries in the world and no one who is elected in the United States is going to do anything to harm that relationship. It’s just too important.

What was the general perception of Kamala among the Indians in the US?

A lot of Indians believe that Kamala doesn’t feel as though she embraces her Indian heritage, which isn’t true, because she talks about her mother every chance she gets, how she immigrated from India, her grandparents and her upbringing in both the Indian and Black communities.

We were specifically getting a lot of misinformation on WhatsApp about Joe Biden and Kamala Harris from Indians in India, including photoshopping quotes on things which were never said. It was really concerning and getting out of control, and WhatsApp was one of the biggest factors in the disinformation campaign that was happening. However it wasn’t a huge proportion of actual voters who were lost to the idea that Kamala doesn’t care about her Indian side, it was mostly people on the outside.  Overall, Indians in the United States have a positive image of Kamala.

People repeat a lot of talking points because they sound catchy, but overall Kamala being on the ticket resulted in a higher voter turnout amongst Indian Americans to a certain degree. The disinformation was coming less from Indian Americans and more from people watching from the outside.

What other challenges did you face in your campaign work with Kamala?

Combating racism was the number one challenge. For black and brown candidates, the bar is so much higher. Even in terms of media coverage, if you looked at the primaries, the media coverage that Joe Biden, Bernie Sanders and Elizabeth Warren received was 50 times more than Corey Booker, Julian Castro and Kamala Harris. We have to fight 10 times harder to be taken seriously and that was a huge struggle in the campaign. Getting that visibility, even though we existed in the same spaces and performed the same as others, was a huge challenge.

Another major challenge was fundraising, including not being able to staff people. Fundraising only soared after Joe Biden announced Kamala as his running mate.

When Kamala was running for presidency, no one donated, but as soon as she became a white man’s running mate on 11 August 2020, everyone rushed to donate. It killed me inside.

In the primaries, you saw all the negative aspects of being a person of colour running for office.  But to have Kamala on the VP ticket and win, I thought we should keep doing the work, as there can be payoff.

What kind of things will you be focusing on your work now?

A lot of it will depend on how engaged we will be able to keep people for the next four years. We will need to try to get more people access to polls, combat voter suppression and stay on message. Right now, I’m helping with Maya Wiley’s NYC mayoral campaign. We’ve never had a female mayor in NYC before!

People can’t envision what they can’t say but now we have seen a black woman/woman of colour in the second highest position in the United States of America, the gates are going to open – she is normalising us being in those spaces.

We’ve shattered one glass ceiling, why not shatter more?