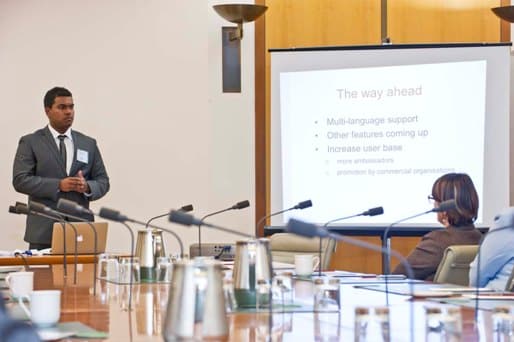 Reading Time: 4 minutesParliament House applauds a special app by a young developer that assists in self-detecting the early stages of breast cancer

Sanjay Sreekumar is not your average software engineering student. Just nineteen years old, Sanjay has recently developed a smartphone app that assists its users in self-detecting the early stages of breast cancer. On June 25, the app was inaugurated at Parliament House in front of not only Federal MPs, but also ambassadors of several countries as part of the Australian Parliamentary group, Federal Parliamentary Friends of Breast Cancer Awareness among Young Adults. Sanjay, who presented the app at its inauguration, developed it with the assistance of a team in order to promote the YAP (Young Adults Program), a charitable organisation that encourages healthy behaviour in young adults.
Breast cancer is one of the most common types of cancer, with Australian women exposed to a 1 in 8 lifetime risk of contracting the disease. It is estimated that 14,940 Australian women and more than 100 men will be diagnosed with breastcancer this year. Most women survive breast cancer, with the five year survival rate for women diagnosed with breast cancer being 89%. However, early detection remains crucial, and that is what Sanjay’s app named ‘Yap App,’ is aimed towards.
Yap App features a number of slideshow screens that guide users through breast self-examination. At the end of the self-examination process, users are prompted to record any abnormalities they came across, allowing them to save the information for future reference, which could be particularly useful for doctors. Yap App, which is targeted at young adults who lead busy lifestyles as a result of studies or other extra-curricular activities, also reminds users to conduct the self-examination every month.
Sanjay started building the app a couple of months ago after a conversation with his father, who was heavily involved in promoting the YAP program. It seemed natural to Sanjay that in order to promote YAP, it should be “accessed by tools that youngsters use” – such as a smartphone app. After his father brought the app idea to YAP directors Roz and Peter, Sanjay was given the green light to go ahead and design the app, an opportunity for which he is extremely thankful. He has already designed a number of apps and websites with the assistance of his own local development team, but the thought of making a difference is very important to Sanjay.
“This started as a passion, and now it seems it is growing into a business,” Sanjay says. “These days I get lots of requests for apps through my website SanjaySreekumar.com. Currently I am making two game apps, which are fascinating me to the core, but nothing fascinates me more than the app that I built for YAP. I feel I am saving hundreds of human lives just through that app. I would like to thank the YAP team for accepting my offer to build the app for them”.
Although studying software engineering has helped Sanjay to a certain extent, he has had to rely on his own devices for much of the journey. “I had to read and understand everything myself. However, it was not that difficult. I had the drive to learn, since the idea of saving lives really drove me. The Yap App is free, and I would like it to be free so that the app is available to everyone in any country, thus serving its purpose well,” he added.
One of the most exciting events for Sanjay in the development of the app was its inauguration in Parliament House. “I was thrilled and over the roof when I heard that my app was to be inaugurated in the Parliament House. Even more exciting was when I was asked to present the app before MPs and Ambassadors from many countries. Everyone present offered their support and promised to promote and support the app, and also the YAP initiative. Ken Wyatt MP, mentioned that he would promote this with his full heart,” said Sanjay.
Sanjay has several plans in mind to improve the app – and he’s getting help from one of the best in the business.
“Google has come forward to provide their assistance in making the app even better by providing me with valuable suggestions,” he revealed. “I had discussions with their experts and many advanced features are being incorporated now”. Some of these features include adding a ‘panic’ button to allow users to locate their nearest medical facility, and multiple language support.
Leticia Lentini, Google’s Australia/New Zealand Events and Brand Marketing Manager, was particularly impressed by the app, mentioning that it was a “good example of ‘how do you use technology for good and how do you use technology to spread the word’”. www.yapstuff.org, the home of the YAP initiative, has been supported by Google grants since 2005.
In the meantime, Sanjay wants to mass promote and market the app in order to reach a wider range of people. “Many businesses, shops and other organisations would be interested in supporting and promoting this app,” he says. “But many of them would be quite interested in promoting this if they get some business advantage too. Our app provides such organisations a tool called ‘App Badging’. Organisations that promote the app get exposure by having their business image displayed in the app”.
As for his personal plans for the future, Sanjay is noncommittal. “My parents always gave me freedom to pursue the career of my choice, and I wanted to be a computer assembler. Later, my interest changed to software, and my parents were always with me. My interests might still change. Currently I am really looking at a career in software development,” he says.
To anyone out there who is interested in creating apps, or exploring other interests that they’re at all unsure about, Sanjay has words of advice, “I would like to suggest this to my young friends: One, do only what you like to do. Two, find a good mentor and three, stick to their advice no matter how hard it might seem initially,” he stated.