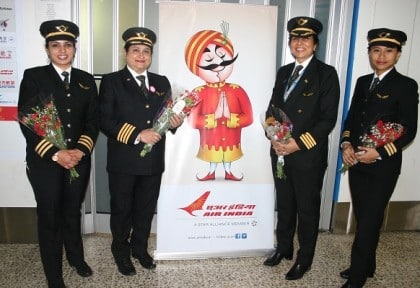 The conversation in the cockpit sure was different this time, as the all-female crew from Air India flew into Melbourne airport, as part of an initiative by Air India to commemorate International Women’s Day.
Led by Captain Laxmi Nagrath, the Dreamliner left Delhi at 1.15pm on 8 March and landed in Melbourne just before 7am on 9 March, covering around 10,215 kilometers, with 237 passengers and nine infants on board.

As the weary travellers made their way out to Arrivals, there was a stir of excitement, and the four Air India cockpit crewmembers emerged in their crisp uniforms, all of them women. They chatted easily about their experiences and were very proud to be part of this initiative to mark International Women’s Day.
This wasn’t the first time an all-female crew flew into Melbourne, according to Captain Sangeeta Nirmal, who claimed that Air India had consciously encouraged and promoted several such flights in the past. Interestingly, both her daughters are also pilots and she strongly believes that aviation is a great career for women.

Captain Nagrath said she had come across no gender disparity in terms of pay or opportunities during her 30-year flying career. “In fact, I was looked after better than the men and my batch mates took extra care in looking out for me when I was training,” she shared with a smile.
This was not their first visit to Melbourne and judging by their conversation, plans seemed to be in place to check out Melbourne’s sights with Melbourne Zoo and St Kilda beach on top of their to do list. The popular Thousand Steps walking trail and bike rides to the beach were also high on the agenda

The cabin crew displayed no sign of weariness, despite the long haul, as they happily posed for photos, smart and smiling in their uniform. Their mood seemed to match the colour of Indian spring (mustard) that was dominant in their saris.
The passengers were equally upbeat and delighted to find out that they were part of a special event.
“It was perfect! The plane couldn’t differentiate between a male and female pilot!” Sunila Forsyth laughingly told Indian Link. “Jokes aside, I felt very good knowing that Air India deployed an all women flight. It’s very empowering and encouraging, especially for Indian women around the world. All the female passengers were given roses before boarding – I was given two!”


Air India is seeking a Guinness World record for its all-female flights around the world. Other airlines have also recently launched similar flights in their quest to join the bandwagon, however Air India claims it is the first one to script history by flying an all–woman crew flight around the world.
AI’s all-women crew operates ‘around the world’ flight

National passenger carrier Air India recently operated an ‘around the world’ flight with an all-female crew, on its New Delhi-San Francisco-New Delhi route.
Flight AI 173 took off from Indira Gandhi International Airport in Delhi on 27 February to San Francisco, covered a distance of around 15,300 km in 15 and a half hours over the Pacific route, and on the return journey from San Francisco over the Atlantic.
“The entire flight was operated by the women staff of eight departments,” an airline release said. “These departments included cockpit crew, cabin crew, check-in staff, doctor, customer care staff, ATC (air traffic control) and the entire ground handling from operator to technician, engineer and flight dispatcher and trimmer.”
The line operation safety audit was done by Harpreet A De Singh, ED (executive director) Flight Safety, Air India. This is the first time that this audit was done by a female officer for an around-the-world trip.
- Advertisement -
Share
WhatsApp
Facebook
Twitter
Linkedin
Previous articleSounds Sculpted by the Sea
Next articleHow to make herbal Holi colours