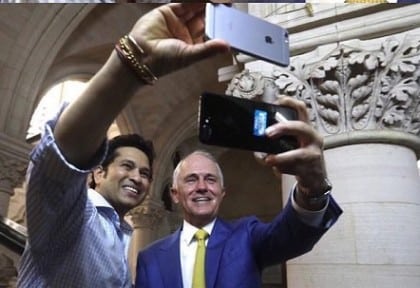 At a ceremony in the gardens of the of the University of Mumbai, PM Turnbull said that Victoria University and the University of Canberra will assist India to establish a ‘National Sports University’ along the lines of the Australian Institute of Sport.
Under the IASP, the two countries will cooperate in four key areas – athlete and coach training and development, sports science, sports governance and integrity and grassroots participation.
In this context, the PM Turnbull and Goel met some young girls from Mumbai slums who are being taught to play sports by Apnalaya, an NGO with which Tendulkar’s English mother-in-law Annabel Mehta is associated.
Turnbull praised the initiative, saying that “sports builds up social capital”.
Goel said that India has a lot to learn and share with Australia on the sports front.
“The IASP would facilitate exchange of athletes, coaches, technical officials and sports scientists between the two countries,” he added.
Goel said India has started treating sports as a very important component of public health management as well as education.
“We have launched a major programme, ‘Khelo India’, for developing a sporting culture at grassroots level and we are planning to introduce sports as a compulsory subject in schools,” he added.
He announced that the National Sports Talent Identification and Development Portal would be launched in India shortly.


Winding up his trip to India, Turnbull said: “This trip has been all about a deeper more engaged collaboration between Australia and India, in economics, in sport, in health, in science, in education and of course in national security.”
Earlier in the week, during talks with Indian Prime Minister Modi in Delhi, Turnbull invited elite Indian sports teams to train in Australia ahead of the 2018 Commonwealth Games on the Gold Coast.
In Mumbai Turnbull also met Maharashtra Governor C.V. Rao and Chief Minister Devendra Fadnavis at Raj Bhavan.
“We discussed and decided on ways to move ahead in collaboration with Australia in transport, communication and infrastructure sectors in Maharashtra,” Fadnavis said.
In this context, he apprised Turnbull of the investment opportunities like the 200 km Mumbai Metro, Coastal Road Projects and Nagpur-Mumbai Expressway.
The Australian Prime Minister arrived on Sunday 9 April on a four-day state visit to India – his first to India since he assumed office in September 2015.
His predecessor Tony Abbott had visited India in September 2014 and this was followed by Modi’s visit to Australia in November that year.
- Advertisement -
Share
WhatsApp
Facebook
Twitter
Linkedin
Previous articleIndia and Australia strengthen defence, security partnership
Next articleFor the love of the rhythm