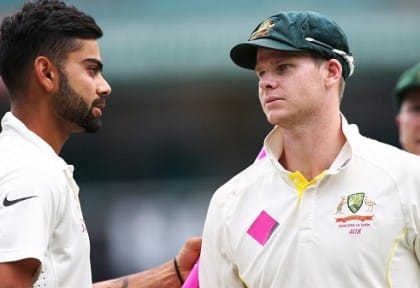 On the eve of a pivotal chapter in modern cricket’s most passionate rivalry, India find themselves in the unusual position of being favourites to whitewash Australia

Four years ago, the Australian cricket team endured its worst-ever tour of India, and arguably of any country, when the unsettled tourists, beleaguered by internal divisions and disciplinary issues, succumbed meekly to a buoyant home team, which recorded four wins in a test series for the first time in its 81-year history.
More recently, a surging Indian team repeated that feat against a hapless England, no doubt watching on while Australia limped its way through a turbulent yet seminal home summer, which involved almost as much soul-searching as it did fetching the ball from beyond the boundary rope.
Ahead of Australia’s imminent tour of the subcontinent, India are the top-ranked test side, and the tourists number 2; yet you would be at odds with fans of both teams, former cricketers, bookmakers – and, one suspects, the Australian cricketers themselves – if you favoured anything but a 4-0 result in India’s favour.
We’ve crunched the numbers, checked the facts and analysed the players – here’s our take on what will make or break a highly anticipated series between the fiercest of rivals.

A surprise to begin with is that of the squads likely to feature in the series, both will have retained at least seven players from the 2013 tour. Each side has lost great players, and leaders, since the last tour. While Australia has farewelled Michael Clarke, Mitchell Johnson and Shane Watson, India have said goodbye to MS Dhoni, Sachin Tendulkar and Virender Sehwag. But, based on the composition of their most recent playing XIs, Australia is the more “settled” team, albeit this is a misnomer; Australia’s playing XI in India is as uncertain as they come.


The difference, of course, lies in the new blood. Relative newcomers to the Indian set-up include Karun Nair, Jayant Yadav and KL Rahul, each of whom knows how to score big in subcontinental conditions against top-flight opposition. However, Australia’s entire batting order is either untested or unproven in the subcontinent. The batting averages, in particular, don’t make for pleasant reading: Warner (24), Smith (40) and Wade (18) have not made 500 runs between them, while Usman Khawaja, along with youngsters Peter Handscomb and Matthew Renshaw, are yet to play in India.
Australia’s fortunes will, to a great extent, depend on their rising stars – Smith and Warner cannot be counted on to carry the side, as they have over the last few home summers.

The pre-eminent batsmen of their generation, the talismanic presence of these two captains is unrivalled in world cricket. The importance of Steve Smith and Virat Kohli to their respective batting orders is a redundant discussion; their talent is immutable. It is their ability to lead that forms a fascinating sub-plot.

Take Smith. This will be the biggest test of his captaincy yet; he stands at the helm of a motley crew filled with bits-and-pieces all-rounders, a hastily-assembled mix of youth and wisdom, spinners who occasionally spin the ball, and a depleted fast-bowling arsenal. Smith will be smarting from a disastrous tour of Sri Lanka, and he will have learned plenty, but given his questionable management of Nathan Lyon during the home summer, it is open to debate how well he will lead the less-experienced O’Keefe and potential debutant leg-spinner Mitchell Swepson.
Kohli, on the other hand, has the rare chance to lead his country to what would certainly be its most successful summer in history – the chance to defeat both the old enemy and the new enemy in consecutive series is a rarity. Rarer still is the opportunity to humiliate them both in front of an adoring home crowd. Remember, in Ashwin and Jadeja, Kohli has the two best sub-continental spinners in the world at his disposal – and it makes his job that much easier than Smith’s.

To Smith, avoiding a 4-0 whitewash will be a victory; to Kohli, anything less would be inexcusable.

Australia have four spin-bowling options in their squad, and getting the mix right will be critical. Incumbent tweaker, and Australia’s greatest-ever off-spinner, Nathan Lyon will be under enormous pressure to deliver results, with his inability to build pressure in Sri Lanka leaving him very much in the spotlight. Steve O’Keefe, the veteran left-arm spinner who has made a steady yet unspectacular start to his Test career, is more likely to tie up an end, but less likely to turn a ball. The two other options, leg-spinner Mitchell Swepson and part-timer Glenn Maxwell, are not even assured a game.


India find themselves blessed with spin-bowling options; Jayant Yadav forms the perfect foil for the indefatigable Ashwin and Jadeja, with Mishra (should he be selected) waiting in the wings to pick up the scraps. Each brings something different to the table, and it is a strategy that Australia have attempted to emulate – at least with their selections.
Australia’s squad suggests a desire to beat India at its own game; there are only three seamers in the squad, with Pat Cummins and James Pattinson failing to receive a call-up. Given the immense workloads of Starc and Hazlewood in recent times, however, this puts immense pressure on the largely inexperienced Australian spinners to manufacture 20 wickets in each match. Luckily, in their counterparts, they will have ample opportunity to learn from the best.

Adam Gilchrist recently described India as a country that “weighs you down”, but the slightest hint of Indian complacency could soon see the shoe on the other foot, and the Indian players are aware that anything less than a whitewash will be perceived as a failure.

We have a moment to pause ahead of writing another chapter in modern cricket’s most passionately-contested rivalry. This writer’s prediction? 4-0 to India, with two innings victories.
- Advertisement -
Share
WhatsApp
Facebook
Twitter
Linkedin
Previous articlePeacock feathers inspire new variety of non-polluting fabric dyes
Next articleGo nuts!