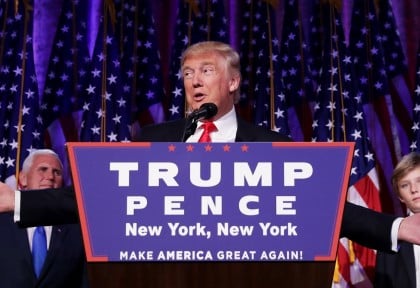 
What a night it was! Defying pollsters and pundits, Republican Donald Trump won the American presidency on Wednesday 9 October, delivering a stunning rebuke to the establishment on both sides of the political divide.
Tearing the political playbook to shreds, the brash billionaire shattered his Democratic rival Hillary Clinton’s dream to break the hardest glass ceiling and achieve her 16-year-old dream to return to the White House in her own right.
By the time an upset former first lady conceded in the wee hours of Wednesday morning after declining to deliver the traditional concession speech – Trump tapping into the anger of the working class, was well on way to capture 305 of the 538 electoral seats.
It was almost a rerun of the Manhattan mogul’s hostile takeover of the Grand Old Party in the primaries after demolishing 16 top politicians with insults, calling women names, branding Mexicans ‘rapists’ and proposing a ban on the entry of Muslims.
Pundits predicting his doom were proved wrong then too, but at least the polls got it right that time. How did all the pollsters bar one – LA Times/USC Tracking – get it so wrong during the nail biter that saw him losing big even at 8 p.m.?

Democrats had only one word for their stunning defeat – “Comey”. It was FBI director James Comey, who had sent the Clinton campaign into a tail spin by rekindling her email saga with a “Diwali Dhamaka” only to clear her again two days before the poll.
Trump did thank Clinton’s desi aide Huma Abedin and her sexting scandal embroiled husband Anthony Weiner – “Good job Huma, thank you Weiner” – after discovery of thousands of Clinton emails on their shared computer triggered the new probe.
Huma and Comey might have contributed somewhat to Clinton’s losses, but what shattered the prophets’ crystal ball to smithereens was what may be called the “Revenge of the Deplorables” as Clinton once called Trump supporters.
The pollsters failed to see the surging crowds at Trump rallies or hear the voices of the “rednecks”, as Clinton’s hubby Bill dismissed the uneducated working-class white people toiling in the factories and fields in rural America.

Her well-oiled political machine flush with a near billion dollar war chest could not prevent her electoral firewall in battleground states from Ohio to Florida, supposedly held by the cement of minorities – blacks, Hispanics and women – from crumbling.
Exit polls data shows that among non-white voters Clinton led Trump by 54 points, far smaller than the 61 per cent who favoured President Barack Obama, while Trump earned the votes of 60 per cent white men and 52 per cent white women.
The millennials and the supporters of her primary rival Bernie Sanders too did not seem to have come out in numbers she needed.

While only seven percent of the Indian-Americans supported Trump with ten times as many backing the Democrat, he adapted Prime Minister Narendra Modi’s campaign slogan – “Abki bar Trump Sarkar” – to woo the community late in the game.

In his victory speech, Trump for once turned presidential in the “beautiful moment” saying: “It is time for us to come together as one united people.”
It’s hard to predict how Trump Sarkar would govern or reach out to the world. But he has praised Modi as a “great man” and said the two nations would be “best friends”.
With Modi too looking “forward to working with Trump closely to take India-US bilateral ties to a new height” one can expect a Modi-Trump ‘bromance’ to bloom soon.
Meanwhile, Indian Americans made a mark in Congressional politics with Kamala Harris becoming the first to be elected to the Senate and four others winning seats in the House of Representatives.


Harris was elected from California to the Senate defeating fellow-Democrat Loretta Sanchez.
Pramila Jayapal from Washington, Raja Krishnamoorthi from Illinois and Ro Khanna from California will join Ami Bera, who was re-elected from California, in the House of Representatives.
Tulsi Gabbard, who is a Hindu although not of Indian descent, was re-elected to the House from Hawaii.
All Democrats, they range in age from 35 years to 52 years and represent the emerging class of leaders.
“Winning a Senatorial seat combined with several Congressional victories, has made the community somewhat reach its goal of political involvement,” Thomas Abraham, Chairman, Global Organization of People of Indian Origin, told IANS.
“This also help the US and India to come closer as a global partner in trade, investment, education, science and technology, military cooperation and fighting terrorism.”
The victory of Harris is significant because senators are elected by the entire electorate in their states and California is the most populous state in the nation with 18 million voters.
The 52-year-old Harris, who traces her family roots to Chennai, is a lawyer by profession and was twice elected Attorney General in 2010 and 2014.
Bera, a 51-year-old doctor, had come under a cloud after his 83-year-old father, Babulal Bera, was found guilty of illegally funding his son’s election campaign and sentenced to a year in prison. Prosecutors, however, cleared Ami Bera of involvement in his father’s crime and he beat the odds to defeat his Republican rival Scott Jones.

A financial analyst by profession, Jayapal, 51, defeated fellow Democrat, Brady Wilkinshaw. A civil rights activist involved in immigrant and women’s rights causes, she was born in India. She received the endorsement of Bernie Sanders, the insurgent socialist who ran against Hillary Clinton in the party primary.
Krishnamoorthi, 43, who had advised President Barack Obama on economic issues when he was a Senator, received a personal endorsement and a promotional video from Obama. He defeated Republican Peter DiCianni in a constituency that comprises Chicago suburbs.
Born in India, he is a technology entrepreneur heading two companies and has also served as Illinois state DeputyTreasurer and an Assistant Attorney General on special assignment to fight corruption.
Khanna, a former federal Deputy Assistant Commerce Secretary, won from the heart of Silicon Valley on his second try. With the endorsement of former President Jimmy Carter, he defeated sitting Congressman Mike Honda in a bitter rematch.
Harris has a dual identity: She is also counted as an African American as her father is a Jamaican of African descent and she follows the Baptist faith.
She would also become the second American woman of African descent elected to the Senate and joins two other African Americans in the Senate.
After her parents divorced, Harris was raised by her mother Shyamala Gopalan, a cancer specialist from Chennai, giving her equal claim to Indian heritage.
Gabbard’s Republican rival Angela Kaaihue launched bigoted attack on her with anti-Hindu statements and called her a “pathetic Hindu 1,000 gods leader.” Republican Party leaders condemned Kaaihue and withdrew support to her.
The first Indian elected to Congress was Dalip Singh Saund, who won from California in 1956.
Arun Kumar and Arul Louis, IANS
- Advertisement -
Share
WhatsApp
Facebook
Twitter
Linkedin
Previous articleA surgical strike on black money
Next articleAge is just a number