The sweetest of victories 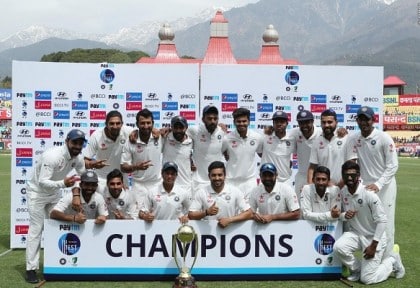 After a month-long arm wrestle involving a myriad of on-field theatrics, several combative press conferences, and consistently heart-stopping cricket, leading into the final Test in Dharamsala, there remained nothing to separate Australia and India in the 2017 edition of the Border-Gavaskar Trophy. A series so keenly contested deserved a thrilling finale – and against the stunning backdrop of majestic Himalayan peaks, the two sides delivered a fitting crescendo. Ultimately, it was India who prevailed by 8 wickets, sealing a 2-1 series victory that will go down as one of its sweetest ever.

The first of the three new Test venues in the series, Pune will consider itself lucky to host another Test match. Labelled ‘poor’ by the ICC, the Pune pitch proved diabolical for both sides, but stunningly, it was India who blinked first.
Reducing Australia to 9-205 in its first innings, India was in the ascendancy; but a stunning riposte by Mitchell Starc led Australia to 261. In reply, despite suffering early setbacks, at 3-94 and with two set batsmen at the crease, India appeared to be in prime position to continue its modus operandi for the summer: win or lose the toss, but be sure to pile on the runs in the first innings.

But on Day Two of the Pune Test, the most stunning hour of Test cricket saw India on its knees, with Steve O’Keefe, the steady left-arm spinner, taking 6-5 in one of the greatest spells by a foreign spinner on Indian soil. India capitulated for just 105, handing Australia a 155-run advantage. Not to be outdone by O’Keefe’s heroics, in Australia’s second innings, Steve Smith plundered a calm century in near-impossible conditions, scoring 109 out of Australia’s 285. Another 6 wickets to Steve O’Keefe in India’s second innings saw Australia win by 333 runs, taking a 1-0 series lead in a series in which it was predicted to lose 0-4.

Biting back in Bengaluru

In Bengaluru, India once again found itself in deficit to Australia in the first innings, giving up an advantage of 87 runs. At 4-120 in the second innings, India were staring down the barrel of a scarcely believable situation: if Australia won the match, Australia would retain the Border Gavaskar trophy.

Enter Ajinkya Rahane, and India’s answer to Steve Smith, Cheteshwar Pujara. A 118 run partnership – the first century partnership of the series – seemed to have put the match beyond doubt, until India lost its last 6 wickets for 36 runs, setting Australia a target of 188 on a deteriorating wicket.
With Australia 4-98, the match was still in the balance. The then-world number one bowler, Ravi Ashwin, who had been conspicuously missing from the series so far, came roaring back with 6-41, leaving Australia to lick its wounds after being within agonisingly close sight of a famous finish line.

For the second consecutive Test match, Australia seemed to have one hand on the trophy courtesy of its huge first innings of 451, which featured an unbeaten 178* by Steve Smith and a maiden test century for Glenn Maxwell. But as it had done all summer, India found a way to cancel out the first innings after losing the toss. Coming together at 6-328, Wriddhiman Saha and Cheteshwar Pujara put on a record 199 runs in 63.2 overs, gruelling against impressively accurate bowling. Pujara’s 202 off 525 balls was the longest-ever innings by an Indian in terms of balls faced, and, despite his dismissal, a brutal half-century by man of the series Ravindra Jadeja saw India take a first innings lead of 152 runs.

At 4-63 on the final day, and with talismanic captain Steve Smith back in the dressing room, it seemed as though an Indian victory was all but a formality, but Shaun Marsh and Peter Handscomb allayed Australian fears, keeping the tourists in the series with a diligent, match-saving partnership lasting more than 60 overs.

The most picturesque ground in world cricket, Dharamsala’s Test debut was magnificent. For each of the four days it was a breathtaking sight: the players in their off-whites, running along the lush green grass with snow-capped peaks rising above the rustic red Tibetan grandstand behind them. The cricket was excellent, and the match was played in the best of spirits. Arguably though, the pitch made the biggest contribution to the decider; with pace and bounce to surpass any of its Australian counterparts, and enough turn and consistent bounce to satisfy the fussiest of spinners and batsmen. Indeed, the evenness of the deck is evident in the fact that India won the match despite losing the toss.
As ABC Radio commentator Prakash Wakankar noted, the Himalayan peaks were not the only immovable force decked out in white in the decider, as another century by captain Steve Smith in Australia’s first innings saw him become only the second captain (after Alastair Cook in 2012) to peel off 3 centuries in a Test series in India. Having been 1-144, however, Australia was shot out for 300, leaving the door open for an India fightback.

At 6-221 in reply on day three, India were yet again looking like conceding a first-innings deficit. But a crucial partnership between Ravi Jadeja and Wriddhiman Saha brought India back from the brink, sealing a vital 32-run lead with an at times explosive 96 run partnership.
Then came the actual fireworks, in the most hostile spell of fast bowling ever produced by an Indian attack, as Umesh Yadav and Bhuvneshwar Kumar ran rampant with the new ball, picking up 3 wickets – and one suspects, inflicting many more bruises – before Australia had erased the deficit.
From there, it was smooth sailing for the hosts, who wrecked the Australian middle order and chased down the eventual target of 106 with time and wickets to spare.