The injustice of development 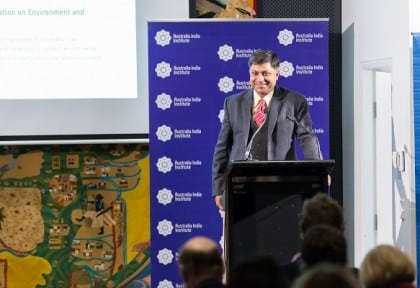 Kumti Majhi, Lama Lobsang Gyatso, Ramesh Agrawal and Praful Samantaray might not be names you’re familiar with, but these men were at the centre of a David and Goliath legal battle waged by four ordinary Indian citizens against massive, powerful companies, British mining company Vedanta, Indian steel manufacturer Bhilwara Group, Korean giant POSCO, and Indian conglomerate Jindal. The man who helped take them on and win? Environmental lawyer Ritwick Dutta. An Ashoka Fellow and award winning lawyer, Dutta serves as the Secretary of The National Green Tribunal Bar Association in India, and recently spoke as part of the Australia India Institute’s ‘Inspiring India’ series in Melbourne.

In a talk titled ‘Challenges for Environmental Democracy in the World’s Largest Democracy’, Ritwick Dutta talked of how participatory democracy in environmental issues is flourishing in India as a result of three key events – the passage of the Right to Information Act in 2005, the establishment of the National Green Tribunal in 2005, and the Forest Rights Act of 2006, which gave people living in forests rights over their land and its use. These milestones in India’s environmental journey are responsible for creating an “environmental democracy”, the pillars of which are public access to information, free and meaningful participation in decision making, and the ability to demand enforcement of environmental laws.
These judgments, said Dutta, have led to India becoming fertile ground for environmental disputes. Indeed, according to the Environmental Justice Atlas India has the highest number of environmental conflict cases. Why?

Dutta overlaid the coal map of India, the forest map of India and the tribal map of India. They overlap perfectly. The struggle for the environment is the struggle for social justice for India’s most marginalised, her indigenous tribal peoples. He talked of the disproportionate impact of the damage caused by hydroelectricity and mining projects on tribals. Though they are only 8.3% of India’s population, they form 40% of those displaced by development projects, and have the least access to the results of development such as access to water, electricity and sanitation. He quotes Arundhati Roy, “The millions of displaced people in India are nothing but refugees of an unacknowledged war.”
India’s struggle for environmental justice is not new. The Chipko Andolan for forest conservation in the 1970s and the Narmada Bachao Andolan in the 1980s brought attention to the destruction of livelihoods caused by ‘development’ projects. Movements in Kerala, Odisha and other parts of the country took off, and by and large the media, academics and scientists were accommodating of the cause. This changed in the mid ‘90s when environmental activism became seen as an obstacle to India’s development. It is in this globalised environment that Dutta’s work has seen him fight cases for small-time defendants against massive corporations.

In Odisha, Dutta and the Dongria Kondh peoples leader Komti Majhi took on Vedanta, which wanted to mine the Niyamgiri Hills, considered sacred by the tribe. They attended Vedanta’s Annual General Meeting in London, and questioned whether Vedanta would mine at St Paul’s Cathedral, the equivalent of the Niyamgiri. The Church of England, a Vedanta shareholder, withdrew support, and Vedanta abandoned its plan. In a fight against Korea’s POSCO, Dutta represented Prafful Samantray. They uncovered a huge number of gaps in POSCO’s official submissions, forcing them to withdraw from India.
In Chattisgarh, Ramesh Agrawal monitored violations of environmental laws, and he and Dutta took on Jindal’s proposed coal mine and won.

In Arunachal Pradesh, Lama Lobsang Gyatso and Dutta fought against a proposed network of 15 hydroelectric projects by the Bhilwara Group on the basis that it affected the cultural and religious sites of the local Monpa tribe. One amongst these sites was a three kilometre stretch of the Nyamjang Chhu River, the wintering sites of the highly protected black necked cranes, believed by the Monpa to be the reincarnation of the 6th Dalai Lama. The judgement favoured the cranes.
Despite these successes, Dutta is cautious about the future. “There are 40 to 50,000 forest approvals given each year. Only 50 to 80 are challenged, and of these, only 10 to 15 have a favourable outcome.”
However, he ended on an optimistic note, “But, if we can stop those projects that have a severe impact on livelihood and culture, it is totally worth it.”