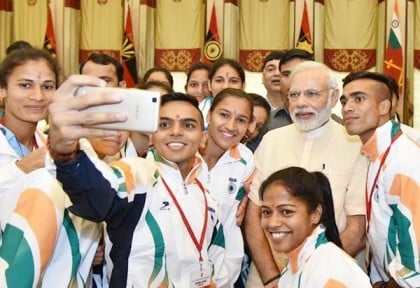 VETURI SRIVATSA on India’s medal chances at the 2016 Olympics

As Prime Minister Narendra Modi spent time with the Rio-bound athletes to wish them good luck, he gave a clarion call to all the 600 districts in the country to prepare at least one athlete for the 2020 Tokyo Olympics.
He said he would like to see the number of the athletes going to Rio, no less than 119, double at Tokyo.

The largest-ever Indian contingent this time means it will be easier to spot an Indian athlete or official around the Games Village or at competition venues, unlike in the past when barely 50-odd used made it to the Olympics. In fact, more officials and political hangers-on in the form of teams from states used to visit the Games venues.
Just when the athletes started leaving for Rio, they were stunned by a bombshell – two athletes testing positive for banned drugs, one of these a wrestler who had to fight his way through law courts to make it to the Games. Narsingh Yadav was in the spotlight for over a month for all the wrong reasons but managed to finally get a reprieve. The other athlete caught in the doping web is shotputter Inderjeet Singh (although he, too, like Narsingh, smells a rat, and it remains to be seen if his appeal is favourable).


Be that as it may, how did the contingent increase so greatly from the 83 athletes in London in 2012? The Indians will be figuring in two more disciplines than the 13 in London – including the 16-member women’s hockey contingent which is going to the Olympics after 36 years.
Then, the 36-member athletics contingent – 19 men and 17 women – is 22 more than the strength at London four years ago. Add three Indian golfers, with the discipline returning to the Games after 112 years – and there is a marvellous woman gymnast promising a medal.

The Sports Ministry and the Sports Authority of India (SAI) have spared no effort in coordinating with the national sports federations in preparing the athletes. For once, money was not in short supply.
Six months ago, SAI Director General Injeti Srinivas was confident that there could be a double-digit medal success at Rio. At London, their position suffered despite winning six medals because there was no gold in the tally.
Three of the London medal winners – silver-medallists shooter Vijay Kumar and wrestler Sushil Kumar, and bronze medallist and newly-nominated Rajya Sabha MP Mary Kom – will not be at Rio. The other medal winners, all bronze, Badminton star Saina Nehwal, shooter Gagan Narang and wrestler Yogeshwar Dutt are going with huge hopes of back-to-back medals.

The perennial hope of a medal from the men’s hockey team lives on. This time, expectations soared after the team finished on the podium at the Champions Trophy with a silver medal after three decades. In the aftermath, there was a dip in the performance, particularly in Spain.
The format is such this time that chances of making the knockout round are bright with four of the six teams in each group advancing to the next stage.
That leaves India a chance of even making the semi-finals with a favourable knockout draw if they can beat Argentina, Canada and Ireland in their own group.
Hope, as they say, springs eternal!
- Advertisement -
Share
WhatsApp
Facebook
Twitter
Linkedin
Previous articleAsk Auntyji: helping a hoarder and teaching a tosser
Next articleAn open letter to my fellow Indian-Australian youth on violence against women