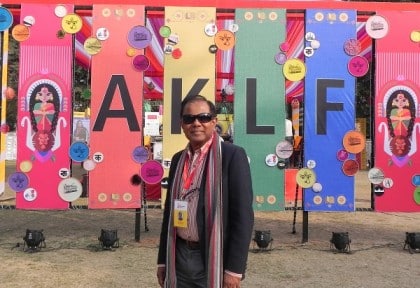 Along with Ritu Menon, Prajwal Parajuly and Sundeep Bhutoria, he participated in an hour-long session titled ‘Taking Off: Travel Tales’.

“It was a great honour for me to attend this literary affair in my birth city as a formally invited delegate,” Sandip recounted to Indian Link.
Anita Nair, a highly acclaimed contemporary novelist moderated the session, presented in association with domestic airline Vistara.

Kolkata, the City of Joy, is ranked as India’s unquestionable intellectual epicentre, so it was not unusual to sense the gusto among local Kolkatans for the AKLF, considered one of the city’s signature events. Sponsored by the elite Apeejay Surrendra Group and the Oxford Bookstore, on Park Street, Kolkata, established in 1919, AKLF blossomed seven years ago in 2010 out of the bookstore’s continual association with books, writers and publishers. Though many literary festivals currently mushroom across the country, AKLF remains distinctive because it’s the only one that has a nearly century-old bookstore as its spearhead.

This year, the eighth edition of the festival, with the overarching theme of “Towards Inclusiveness”, was held within the premises of St Paul’s Cathedral, an iconic site of magnificent heritage. Several literary personalities of national and international repute took part in the carnival, including Shashi Tharoor, Shobha De, Kunal Basu, Anita Nair, Devdutt Pattanaik, Amit Chaudhuri, Urvashi Butalia, Ananya Vajpayee and Ritu Menon. There were quite a few from overseas, Alessandro Lutman (poet from Italy), Neal Hall (poet from USA), Benoit de Vilmorin (photographer from France), Michael Dwyer (publisher from UK) and Rachel Dwyer (Professor of Indian Cultures and Cinema, SOAS, University of London) among others.
Like previous years, the literary fiesta presented many meaningful conversations and illuminating discussions, deep interaction with thinkers and writers in the company of like-minded book lovers, discovery of new talented writers and deep engagement with best intellectual and creative minds of Kolkata. Every session, from a book launch to a talk or panel discussion, reflected the city’s intimacy with the global literary forum at large.

Among the highlights of the festival was a tribute to one of the greatest Indian writers of the 20th century, Kolkata-resident Mahashweta Devi, who passed away last year at the age of 90. This session was held at the Presidency College and included a film screening on the writer.

Australia holds a special relationship with this event. Amongst others, the Australian Government and the Australia Council for the Arts are two major partners of this prestigious affair. Social advocate and writer Yassmin Abdel Magied (2015 Queensland Young Australian of the Year) engaged the audience with her inspiring talks, while Wendy Were, Executive Director from Australian School of Arts, led a delegation of Australian publishers. Hema Singh Rance, Manager Culture and Public Diplomacy from the Australian High Commission was present at the festival, representing the Australian Government.