Supermoons are big and bright, but not as rare as the hype would suggest 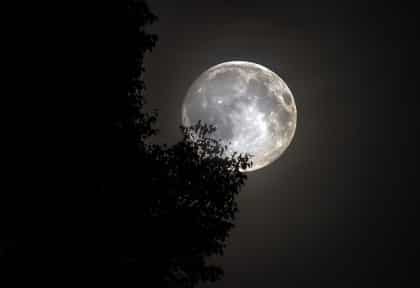 Astronomer Christopher Palma, from Pennsylvania State University on the facts behind the supermoon

As an observational astronomer who teaches students about the behavior of the moon, I’m thankful for anything that inspires people to go out and look at the sky. For me it’s second nature to pay attention to the moon; when my son was born, I would take him out at night to observe with me, and one of his very first words was “moon.”
But I have mixed feelings about what’s being billed as the upcoming “super-supermoon.” Many astronomers do not like using the term because reports overhype the factors that make certain full moons unusual. Most of what you’ve likely read has probably misled you about what you can expect to see on Nov. 14 and just how rare this event is. Beautiful, yes. Worth looking up for, definitely. Once in a lifetime… that’s a bit overblown.

Just about everyone is familiar with the moon’s changing appearance as it goes through its phases from crescent, to half-illuminated (first quarter), to gibbous, to full, and then back through gibbous, to half-illuminated (third quarter), to crescent, to new.
This pattern occurs because the moon orbits the Earth. When the moon is between the Earth and sun, it’s a new moon, and you don’t see it that day. When the moon is on the opposite side of the Earth from the sun we get a full moon as the sun’s light illuminates almost its entire face. The complete sequence of phases takes about the same amount of time as it does for the moon to orbit the Earth once – just about a month.
As the moon makes its monthly trip around our planet, it travels on an elliptical, not circular, path. Every object in the solar system orbits like this, including the Earth around the sun; over the course of the year, the Earth is sometimes closer to the sun and sometimes more distant. Same for the moon – sometimes it’s closer to us and sometimes farther away.
The changes are proportionally not large; at “perigee” (the closest it gets to the Earth) the moon’s approximately 10 percent closer to the Earth than at “apogee” (most distant point on its orbit). Over the year, the moon’s distance from Earth varies from around 222,000 to 253,000 miles.

The time it takes the moon to go from perigee to perigee (about 27.3 days) is shorter than the time it takes to go through a complete set of phases (about 29.5 days). Because these timescales are different, the phase at which perigee occurs varies. Sometimes perigee occurs when the moon is full, but it is just as likely for perigee to occur when the moon is in the first quarter phase, or any other. Whichever phase the moon is in when it’s at perigee will be the one that looks largest to us here on Earth for that month.

At perigee, the moon can appear 14 percent larger and 30 percent brighter than an apogee full moon. But this is complicated by the fact that our eyes play tricks on us and convince us the moon looks larger when it is near the horizon than when it is higher in the sky. Every full moon will look big and bright whether it happens at perigee or apogee.

So what’s a supermoon?

The first time I heard the phrase “supermoon” was in 2011, and someone had to explain the suddenly in vogue term to me. People were using it to describe the full moon that happened to occur within an hour of perigee in March of that year. The moon’s perigee distance also varies a bit, and March 2011 was the moon’s closest perigee of that year.

This was a somewhat rare event – a full moon occurring not just at perigee, but at the closest perigee of the year. But many people got the impression that this was an exceedingly unusual event, and rushed to see and capture images of this supposedly ultra-rare moon. Depending on how closely you require the full moon to occur to perigee in order to call it a supermoon, though, these events happen at least roughly once a year, and often more frequently.
Which brings us to this month’s much ballyhooed “super-supermoon.” News stories are hyping the upcoming full moon as a once-in-a-lifetime viewing opportunity. It’s true that the Nov. 14 full moon is the closest since 1948, and the next time the full moon will be closer is in 2034.
But this month’s full moon is only 0.02 percent closer – a mere 41 miles! – than the March 2011 supermoon. These tiny distances make no noticeable difference in the moon’s appearance.

Please do go out and observe the November full moon. If you are good with photography, try to document that the moon does appear larger than the other months this year. Just be aware you’ll have other virtually equivalent opportunities to do so pretty much every year for the rest of your life. So don’t worry if you miss it. You can catch the supermoon next time around.
Christopher Palma, Senior Lecturer and Associate Department Head for Undergraduate Programs in Astronomy & Astrophysics, Pennsylvania State University
This article was originally published on The Conversation. Read the original article.