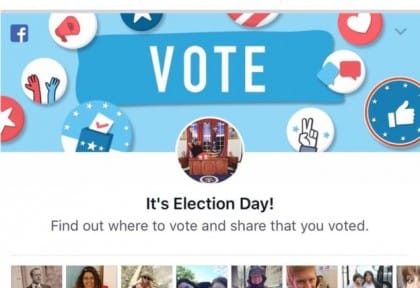 On polling day in each of the five states, there will be a “polling day reminder” that will be shown at the top of the News Feed of people who are 18 and above.
“The reminder links to the Election Commission’s website where people can find details on their polling booth and other polling day information. People also have the option to share with their friends that they have voted by clicking on the ‘Share You Voted’ button,” the company said in a statement.
By clicking the button people can highlight their status as a voter to their Facebook friends, without specifying who they voted for.

“We want to encourage civic participation – that is why we have created tools to make it easier for people to participate and have a voice in the process,” Ankhi Das, Director of Public Policy for Facebook in India and South and Central Asia, said in a statement.
Political candidates and elected officials in India will also have the option of sharing a brief (200 character) description of their position on 20 preset issues (such as budget, education, health, development ) or creating a custom set of issues on which they wish to share their views.
Facebook first showed the Election Day reminder (I’m a Voter) button in the US in 2008 to remind people that it was Election Day in the country.