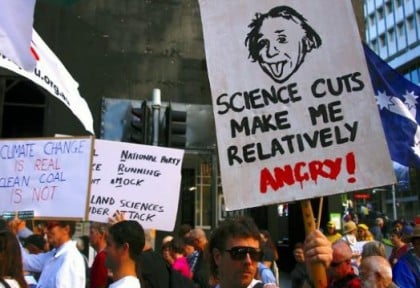 Scientists take to the streets for ‘March for Science’, to send a message to the decision makers

Built on the premise that science belongs to everyone, the inaugural March for Science brought together thousands of community members in major cities across Australia to lobby for adequately funded and publicly communicated science as a pillar of modern society. The event coincided with Earth Day (April 22).


Originally sparked by a social media thread against Trump’s policies, the grassroots campaign has now become a global movement for science engagement, calling on everyday citizens as well as political leaders and policy makers, to champion science and its potential to touch everyone’s lives and augment the standard of living.
Informed policy, stable investment, open communication and universal literacy form the cornerstones of the Australian chapter, which aims to be non-partisan.
Sending a clear message that science matters, the march attracted 10,000 people nationwide from all walks of life, with diverse individuals and organisations rallying to present a united front and stand up for evidence and science.

“We’re really pleased with the outcome of the march,” public relations expert and event organiser Jocelyn Prasad told Indian Link. “The turnout showed us there is a substantial group out there that believes politicians need to pay more attention to science when formulating policy. We also think there is growing support for our aims to increase scientific literacy, promote open communication of science and ensure stable funding of science.”
The Sydney event featured a number of high profile speakers including John Hewson, Eva Cox, Stuart Khan and Angela Maharaj.

Addressing the gathering, Dr Maharaj, who is a lecturer at the Climate Change Research Centre (CCRC) at the University of New South Wales and Associate Investigator with the ARC Centre of Excellence for Climate System Science, stated that March for Science is about trying to send a strong and clear message to decision makers.
“The public already embrace science,” she said. “They know about wireless and about treatments for cancer. March for Science is a signal to people who fund scientific institutions and make decisions in our government to see that people care about science being part of the decision-making process. Because it’s about as good a process as we have for coming up with information and evidence, which can be used when there is a discussion about what to do with all our taxpayer dollars.”
This message was reinforced by former Liberal leader Dr Hewson.
“At a time when science is most important to the development of our society, the gap between the public and science is unfortunately widening,” he lamented.
UNSW Associate Professor Stuart Khan added, “Australians want to understand how science and how evidence is being incorporated into policy. Disease, famine, communicable disease, pollution of the ocean, climate change, all of these challenges are addressable by science. Therefore, we are calling on politicians to make laws that are based on evidence, that are appropriate for our future.”

Prasad, one of the many non-scientists who participated in the march, strongly agrees that there is an urgent need to get behind evidence-based research to deal with some of the pressing issues of modern society. Calling for improved science communication, she believes science offers the best hope for her and her family’s future. Low levels of literacy on science matters are a significant cause for concern.
“In a time of political uncertainty where fake news has become part of everyday life, scientists participating in the march know they need to shed their lab coats and spend time explaining their work to non-scientists. They know that being able to explain research in simple terms doesn’t diminish its value. On the contrary, clear communication widens support for it,” she wrote in a recent column.
The success of the recent march has spurred the organisers to leverage the huge grassroots network.
“Our committee of volunteers is catching its breath after organising the march but looks forward to galvanising the support it received and discussing how we move forward after the event,” Prasad confirmed.
- Advertisement -
Share
WhatsApp
Facebook
Twitter
Linkedin
Previous articleScience or Snake Oil: can turmeric really shrink tumours, reduce pain and kill bacteria?
Next articlePriyanka Chopra: Looks That Could Kill