Saving an endangered bird – with tricks, tactics and love 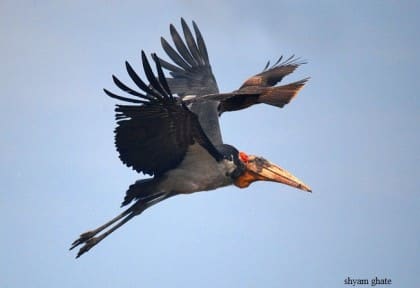 How villagers in Assam are helping in the fight to save the Greater Adjutant Stork. AZERA PARVEEN RAHMAN reports

It’s not a typically pretty bird to ‘ooh and ‘aah over. Far from it, the Greater Adjutant Stork is a big bird with a dull-orange bill and grey, black and white feathers. An endangered species, its numbers were plummeting until wildlife biologist Purnima Devi Barman intervened and, nine years later, has led a village in India to become the worlds largest breeding colony for this bird.

The Greater Adjutant Stork is the rarest of the 20 stork species in the world. Once widely found in the northern and eastern parts of India, and South and South East Asia, it is now confined to only three places in the world — Assam, Bihar and Cambodia. Assam has about two-thirds of the 1,200 surviving storks in the world.
Called ‘Hargila’ (one which swallows bones) locally, the Greater Adjutant Stork is a scavenger whose role in the food chain is crucial. However, owing to its bad odour and loud sound, people drive it away, or worse, kill it.
Working painstakingly to change perceptions, Barman has been fighting the battle since 2008 in a small village called Dadara in the Kamrup district of Assam where most of these birds are found.
The turning point in her life came when, Barman says, she witnessed the sheer apathy and ignorance of the locals towards the bird first-hand.
“One day, while I was still doing my PhD, I was walking through a village and saw a private land-owner cutting down a tree which had the nest of a Greater Adjutant Stork. When I confronted him, I realised that he was unaware about the bird’s significance in the ecosystem,” Barman told IANS.
“That was when I decided to delay my PhD and first work on protecting the bird by educating the people of the villages on its significance.”
It has taken ‘Hargila Baideo’ (Stork sister), as she is now lovingly referred to by villagers, nine long years to get people to shed their previous notion about the bird and start loving it. During this time, Barman chose both traditional and “tricky” methods to gather public support.

“The Greater Adjutant Stork nests on tall trees that are usually on privately owned land; and since the birds were viewed with repulsion, the trees would often be cut. So my approach was to make land-owners take ownership of the bird. But instead of telling them what to do straightaway, we decided to make them connect with the bird through various activities,” Barman, who is associated with the NGO Aaranyak, said.
Among the activities was the Bhagwat Geeta procession in which a ‘Hargila Army’ would take part. “The Hargila Army would be people wearing a headgear in the shape of the stork. This immediately attracts attention and helps us highlight the importance of the bird,” she said.
They also tied up with the Sankardev Sishu Niketan School in the Kamrup district where most of the tree owners’ children went. Children, Barman said, were an important influence on the family’s opinion, and through their tie-up, children were encouraged to adopt a bird, thereby making the conservation movement self-sustaining.
Women, Barman however realised, would often skip the awareness campaigns and other community meetings. “So we decided to lure them with a cooking competition at the end of which the traditional meal prepared would be offered to the deity. The religious angle made it difficult for the women to say no, and once they came, we presented them with the facts of how the Hargila helps their families and communities, and should therefore be protected.”
As the movement gathered momentum, and a sense of ownership and pride replaced the earlier repulsion, things began to look up. Barman decided to step on the gas and weave the livelihood angle into the campaign. They formed a self-help group in which women were taught different handloom techniques to create Hargila designs on merchandise such as the traditional mekhla-chador that Assamese women drape.


Wetland degradation has also played a major role in the plummeting numbers of the Greater Adjutant Stork. During the breeding season, the bird is dependent on the wetlands for its food – frogs, reptiles, fishes, etc.
“But because of rampant, illegal construction activities, conversion to farmland, and unchecked garbage disposal, wetlands are dying a slow death. It’s a vicious cycle. We have therefore been running a ‘Save Wetland, Save Greater Adjutant Stork’ campaign too,” Barman said.
On the success of her work, the conservationist said, “Before we started in 2008, there were 28 nests. Later, in 2014, when we did a survey, there were 170 nests. Today Dadara village is the world’s largest breeding colony of the Greater Adjutant Stork.”
Despite her best efforts, it’s not all good news. In the last week of January this year, as many as 22 carcasses of the Greater Adjutant Stork were found in the Deepor Beel wetland near here. Even as investigations got underway, Barman opined that the solid waste disposal site of the municipality near Deepor Beel, on which the birds are often found feeding, should be moved to another site.
“It’s an uphill task, and the fight must go on,” Barman says.