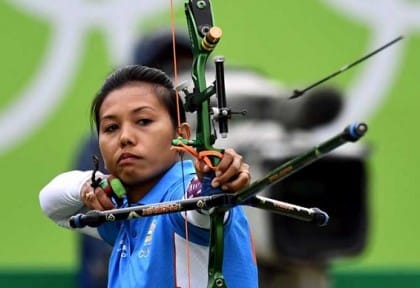 Woman archers Laishram Bombayla Devi and Deepika Kumari along with boxer Manoj Kumar were the only bright spots in an overall disappointing day for India at the Rio Olympics, with medal hopeful Jitu Rai, judoka Avtar Singh and weightlifter Satish Shivalingam crashing out of their respective disciplines.
Bombayla and Deepika advanced into the 1/8 Eliminations round of the women’s individual archery completion while Manoj stunned 2012 London Olympics bronze medallist Evaldas Petrauskas of Lithuania by a split decision in the Round of 32 of the men’s Light Welterweight (64kg) category.

Bombayla beat Taipei’s Shih-Chia Lin 108-101 via 27-24, 27-24, 26-27, 28-26 at the Sambodromo.
Earlier, she defeated Austria’s Laurence Baldauff 105-98 in the 1/32 eliminations in the women’s individual round match.
Bombayla started the match against Lin with a nine pointer, following it up with a seven and an eight.
But the cumulative 24 points in the first set were not enough for her to win as Laurence scored three consecutive nine’s to take a three-point lead.
But Bombayla quickly found her rhythm to score 28 in the second round to win 28-24.
She maintained the momentum in the third set with three straight nine pointers, forcing her Austrian opponent to concede the second set 27-23.

The 31-year-old Manipuri completed her victory in the fourth set with a 28-26 margin.
Deepika also displayed red hot form, defeating the higher ranked Kristine Esebua of Georgia in the 1/32 eliminators before getting the better of Italy’s Guendalina Sartori of Italy in the 1/16 eliminators.
The 22-year-old from Ranchi defeated Esebua 6-4 before overcoming a shaky start to claim a 6-2 verdict against Sartori.
Later in the day, Manoj displayed excellent defence and counter-punching skills to beat Petrauskas by split decision in the Round of 32 of the men’s Light Welterweight (64kg) category at the Riocentrio Pavilion.

Up against the bronze medallist of the 2012 London Olympics, Manoj dominated all three rounds to carve out a 29-28, 29-28, 28-29 verdict and advance to the pre-quarterfinals.
The Indian will next meet Fazluddin Gaiznazarov of Uzbekistan in the Round of 16 on August 14. Gaiznazarov had outclassed Malonga Dzalamou of Congo by RSC (Referee Stopped Contest).
“My opponent was strong, but my punches had power. I played according to his punches. I knew he was a hard opponent, so I didnt go with any strategy to the ring. All strategy was made on the go,” Manoj said after his bout.
“My elder brother Rajesh Kumar as coach taught me as much as he could. I have no God givent talent. It’s hard work over 20 years that has brought me here. If my fist has power, I will succeed in the next match too,” he added.

But the rest of the day’s action brought disappointment to India, who continue to search for their first medal in the Games.

Shooter Jitu Rai finished 12th in the 50 metre Pistol qualification round, failing to reach the finals that will be completed by eight competitors.
Jitu consistently managed to hit the bull’s eye on nine occasions in his pet event and his cumulative scores after the six series qualification round read 92, 95, 90, 94, 95 and 88 to total 554. But a poor sixth round cost him the berth to the finals.
“I let my country down. There was wind but I don’t want to make any excuses,” a dejected Jitu told reporters.
In the same event, Prakash Nanjappa never really looked in the hunt with a score of 547 to bow out of the competitions after finishing 25th.
Weightlifter Satish Shivalingam crashed out of the men’s 77 kg elimination round, only managing to lift a total of 329 kg, which was not close to the best lift of 346 kg in his group.
Next to come up with a poor show was judoka Avtar Singh, who lost to Popole Misenga of the Refugee Olympic Team in the 90Kg elimination Round of 32. Avtar, from Punjab, lost by a single point following the end of five minutes of regular time.
The 24-year-old suffered two penalty points that made it difficult for him. Misenga, who hails from the Democratic Republic of Congo, effected a shoulder throw on him to seal the victory.
Meanwhile, in hockey, the Indian women’s team was outplayed 1-6 by Australia in its third group stage match as the morale-sapping crunching defeat raised big doubts over qualification for the quarter-finals.

The difference in class and quality between the two teams was clearly on display as World No.3 Australia scored through Kathryn Slattery (fifth minute), Georgina Morgan (ninth), Jane Claxton (35th), Georgina Parker (36th), Jodie Kenny (43rd and 46th).
It was world No.13 India’s second loss in three matches and they are now sixth in the Pool B standings. They will face world No.5 United States (Thursday) and world No.2 Argentina (Saturday).
The Indian mixed doubles pair of Sania Mirza and Rohan Bopanna will start their campaign at the ongoing Rio Olympics on Thursday after most of the tennis matches had to be postponed due to rain.
Sania and Rohan Bopanna were originally scheduled to face off against Australians Sam Stosar and Jonathan Peers in their opening clash at the Olympic Tennis Centre on Wednesday.

Sania and Bopanna, among the medal hopes for India, will appear in the Olympic tennis competition for the first time as a team.
The Indian duo have been seeded fourth and they need to win only three matches in the draw to win a medal.
Among other significant matches postponed on Wednesday was the men’s singles third round tie between Spanish superstar Rafael Nadal and Simon Giles of France.
Defending champion Andy Murray’s title defence also fell a victim to the vagaries of the weather as the British star’s third round clash against Fabio Fognini of Italy was also rescheduled.
In other news, Indian gymnast Dipa Karmakar made history after qualifying for Rio Olympic final.

Karmakar had no fear about taking on what has been called the “vault of death” as she attempts to become the first gymnast from India to win an Olympic Games medal.
“I believe that practice makes perfect, and then it is not difficult anymore,” she said. “My coach, Bisweshwar Nandi ensured that I practised extensively.”