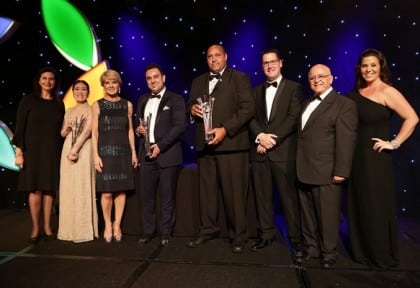 A refugee from Vietnam and another from Iran, were the major winners of Australia’s most prestigious and longest-running national business awards at a gala function at the Pullman Hotel in Melbourne on 5 October.

Sam Bashiry’s company, Broadband Solutions, took out the major award in the Medium to Large Business Category.
Bombs, fighter jets, death and destruction were what 10 year-old Sam Bashiry left behind in Iran when he fled to Australia with his mother and sister. Safe on Australian soil, they spent two years inside a detention centre before resuming their life.

Sam was determined to study and was eventually awarded a degree in Computer Science. He started his working career as an employee at an IT Help Desk before venturing into his own business. He turned a $1000 ambition into a multi-million dollar business in just 10 years. A fantastic success story.
Diem Fuggersberger and her company Berger Ingredients Pty Ltd, took out the award in the Small Business Category.
Diem was seven when she and her family fled Vietnam. The family spent 15 months in a refugee camp – an experience that Diem says made her stronger and more determined.

Losing just about everything in 2009 due to the Global Financial crisis, Diem and her husband started again and formed Berger Ingredients producing spice blends, sauces and marinades. Diem and her team of 30 staff now supply to major supermarket chains across Australia.
Mick Davis from NSW and his company Warialda Engineering & Welding Pty Ltd were the Indigenous in Business Category Winner.
Like Hewlett Packard & Apple, Mick Davis’ “innovation” was born in a garage. The “Davis Star Lifter” came to the rescue of many sore backs & OH&S issues around farming, woodcutting, fencing but also road works, bushfire recovery & clean-ups. Warialda Engineering & Welding has grown to become an industry leader both regionally and internationally, recognised for a range of products and services that include design, repair, metal fabrication and steel products for agricultural and related industries. Mick’s extraordinary talent for inventions greatly impressed the judges.

The awards founder, Joseph Assaf AM said, “Tonight we’ve had the privilege of celebrating the cultural, social and economic contributions made to this country of ours by hundreds of inspiring people – people who have for so many different reasons chosen to make Australia their home.
“Whether they’ve come here as skilled workers, business migrants, or refugees – as two of our winners this year; whether they’re fleeing war or oppression or have come as sponsored migrants, or simply to be reunited with family; they all – each and every one of them in their unique ways – have made a difference.
“Likewise, those recognised in our Indigenous Business category have often had to struggle against enormous hardships and challenges to achieve their marvelous success,” Mr Assaf said.
Guests included The Hon. Julie Bishop MP, representing The Prime Minister, the Hon. Tony Burke MP, Manager of Opposition Business, along with several Parliamentary colleagues. Several members of the Diplomatic and Consular Corps also attended along with many luminaries from all fields of business, media, and the community including Mr Sui Long Liu and Mr Michael Sun, heading the Guangzhou Government Aerotropolis Development Delegation, who flew in from China especially for the Awards.
The Ethnic Business Awards, now in their 28th year, celebrate diversity and multiculturalism, and the achievements of migrants who come to Australia with a “suitcase full of dreams”.
The Awards are televised nationally on SBS and Aurora Community Channel.
SBS1 Sunday 19th November 3:30pm – also on Sunday 13th November on Aurora Community Channel (Channel 173 on Foxtel) at 8pm – SBS1 on Friday 25th November at 11.00pm – and on NITV – Saturday 26th November at 9.30pm