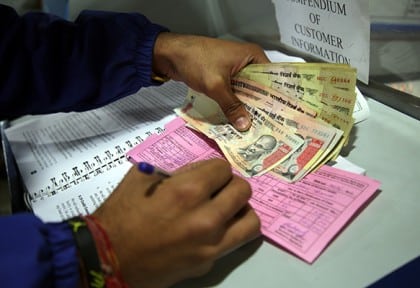 The Reserve Bank of India has extended the window for Non-Resident Indians to exchange banned Rs 500 and 1000 notes to 30 June, 2017. Indian citizens who were travelling overseas will be able to exchange the old currency notes until 31 March 2017.

Individuals will need to provide identity documents such as Aadhaar number, Permanent Account Number (PAN), and evidence they were not in India during the period of 9 November to 31 December, 2016 and have not made prior use of the exchange facilities.
NRIs will also need to submit a customs certificate regarding the import of the old Indian currency notes. No third party tender will be accepted under the facility.
This facility will only be available through Reserve Bank offices in Mumbai, New Delhi, Chennai, Kolkata, and Nagpur.
The earlier deadline for exchanging the specified bank notes ended on December 31, 2016.  The Indian government had earlier given NRIs until 31 March, 2017 to deposit their cash into approved NRO accounts.
Indian Prime Minister Narendra Modi’s shock 8 November, 2016 announcement rendered 86 percent of India’s currency void. Indian customers had until 31 December to exchange their old 500 and 1000 rupee notes for new bills.
PM Modi was initially praised for the bold demonetisation scheme, considered an assault on tax evasion and ‘black money’. But long bank queues, a drop in earnings among rural farmers and small traders, and several about-face turns regarding deposit guidelines led to frustration among some of his supporters.

Modi and his ruling BJP will see if this has been a constructive policy move when Uttar Pradesh (UP) holds the first of several Indian state elections this year, likely in February.
“UP elections will be the first real test to see how people have judged the policy,” political analyst Devdan Chaudhuri told AFP. “I cannot think that this will help BJP because the pain of (the) cash crunch is decimating the rural and the unorganised sectors. The repressed anger will come out soon. And the policy… will cost BJP dearly.”
Modi defended his controversial move to reduce cash in circulation in his New Year’s address to the nation. Labelling the policy a “historic purification ritual”, he thanked Indians for their patience with the scheme’s “inconveniences”.
“This will play an important role in changing the direction of the nation in times to come,” he said.
Further details can be found on the RBI website https://rbi.org.in/