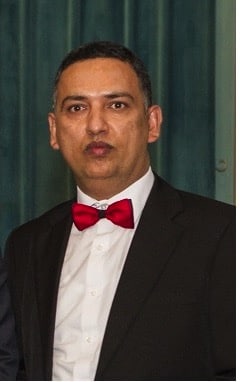 Strengthening community resources through active participation with government, media and other agencies
This year’s OAM recipient and community leader Deepak Vinayak JP believes that leadership is not about titles, positions and flowcharts, it is about one life influencing another.

Five time Australia Day Ambassador and the first person of Indian origin to be chosen as Multicultural Champion by Victoria State Government, Deepak lives by his motto to do more for the world than it does for you.
Deepak has won countless awards and nominations for his work in the field of multicultural awareness and advocacy. He is a Justice of Peace, R U OK and White Ribbon ambassador, Pride of Australia 2018 medal winner, and the list of accolades goes on.
“I strongly believe in connecting all the dots by bringing people together from culturally diverse communities who call Australia home and all my endeavours are focussed on taking diversity to the next level,” Deepak told Indian Link.
He is currently engaged in strengthening the community resources in the areas of violence, gender justice and youth empowerment through active participation and engagement with the government, police, media and broader Australian communities.
Family man Deepak claims to be motivated by his two sons who look up to him as a role model. They inspire him to continue his voluntary work of giving back to the community.
“I have been a key believer in the powers of youth and this has led me to take initiatives to develop formal and informal platforms to bring young people together,” he said. “The aim is to deliberate and act on issues like social cohesion and multiculturalism, and encourage them to play active leadership roles in their own respective communities and regions to strengthen fellow feeling, belongingness and good citizenship.”
These are broadly also the aims of the South Asian Communities Link Group of which Deepak is patron. SACLG focuses on a range of multicultural issues that impact on its member communities which include India, Nepal, Bangladesh, Pakistan, Bhutan, Sri Lanka, Burma, Afghanistan and the Maldives. The group focuses on the delivery of services to Australia’s culturally, linguistically and religiously diverse society.
Hailing from Rampur Phool in Bhatinda, Punjab, Deepak claims he came to Sydney in 1995 with one suitcase, no contacts, $ 20 dollars in his pocket and big dreams.
Initially he did it tough by working in any job he could get and sleeping on benches in train stations, but coming to Melbourne and gaining education and employment changed his life. Deepak is currently Station Master/ Metro Community Liaison Officer at Metro Trains Melbourne.
He has actively engaged with newly arrived migrants who have chosen Australia to be their homeland and trained them in Australian values and ethics and helped them settle smoothly through language support and career guidance.
“We rise by lifting others. I don’t want anyone to go through the tough time I did when I came to Australia, penniless and friendless,” he revealed. “I consider Australia to be a lucky country and am passionate about welcoming new arrivals and giving them the support and guidance that helps them to achieve their migrant dreams.”
Deepak is humbled and delighted to receive the OAM honour. “I feel it’s very special for a civilian like me. I was surprised when I found out I was receiving it because I always felt this honour is for more senior, more mature and much more accomplished people than I,” he said sharing his joy.