Proud to be Victorian 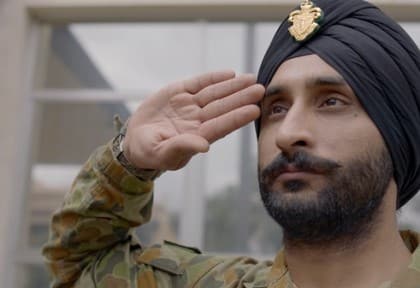 Check out Satbir’s story in the new government campaign on multiculturalism, ‘Victorian. And Proud of it’. PREETI JABBAL reports

As a young man growing up in Ambala Cantt in northern India, Satbir Singh Kahlon was drawn towards tennis, as opposed to his mates who liked cricket.
Images from the Australian Open appealed to him so much that when he decided to move to Australia for higher studies, he knew it would have to be to Melbourne.
Today, Satbir Singh Kahlon is an Officer Cadet in the Australian Army Reserve based at Melbourne University Regiment. He previously worked for the Australian Defense Force as a Multicultural Ambassador.


You can learn more about Satbir in a new campaign launched by the Victorian Government in which Victorians of various backgrounds talk about the lives they have built for themselves in the state.
The Victorian Government is sharing their stories, the media and the community is finding out about their contributions, society has welcomed them, and they are getting a fair go.
They are Victorian. And proud of it.
An initiative launched as part of the Andrews’ Labor Government’s newly released multicultural policy, the ‘Victorian. And Proud of it’ campaign was unveiled at the Maurice Rioli room, at Punt Road Oval, in Richmond, recently.

Be it Fijian mother Anita Robi or Indian-born Satbir Singh Kahlon, the idea behind the well-constructed narrative in the advertisement, is to promote a shared sense of belonging, acceptance, inclusion and contribution.
Satbir Singh Kahlon feels a sense of pride every time he puts on his Army reserve uniform. His turban carries his regiment’s insignia.
“When I got enlisted and first put my uniform on, it gave me a great sense of belonging,” Kahlon revealed. “It urges me to make sure that whatever I do, it is positive for the community.”
As a devout Sikh, Satbir’s life is guided by values of contribution and self-improvement.

Since he arrived in Melbourne as a 17-year-old straight out of school, he has accomplished much. He finished a degree in IT, became a part of his local tennis club, and joined the Army Reserve.
Today the 32-year-old is a proud Australian and Victorian.
“Victoria is very special,” he said. “There are different people from different faiths, from different cultures and different communities coming together making Victoria a great place to live and well worth belonging to.”
As part of the new campaign, Victorians like Satbir are encouraged to read the stories of their fellow citizens and share their own. Victorians from all walks of life are encouraged to celebrate with real life examples of real people enjoying the benefits of a dynamic and diverse Victoria.
This will reiterate the importance of shared Victorian values including one law for all, freedom to be yourself, no discrimination, a fair go for all and importance of contributing to the community.

The Premier Daniel Andrews put this idea in a nutshell when he declared, “Being a Victorian isn’t just about where you live. It’s about contribution and belonging.”
Similarly, the Minister for Multicultural Affairs Robin Scott said, “We all have something to contribute. To foster everyone’s sense of belonging, so they feel pride in their home and their state, is one of the most important things Governments can do”.
Deputy Premier James Merlino and Victorian Police Commissioner Graham Ashton were also present at the launch along with community leaders and media representatives.
The 2017 policy includes details of programs and services with a vision to drive concrete improvements across Government, to ensure that every Victorian can belong, contribute, achieve and succeed.
The policy was developed after extensive consultation with the community and retains some core principals with focus on social cohesion and current challenges faced by the Victorian community.

According to Premier Andrews, “We are stronger for our diversity – but that doesn’t mean it’s always easy. In the face of extremism and fear, we need to reaffirm what is most important to us.”
Victoria’s first ever Gender Equality Strategy is also geared to addressing issues facing women and girls from CALD communities who can face additional barriers as a result of various factors including language, separation from family and support network, insecure visa or job status, gender stereotypes etc.
The expected outcome is for Victorians to be safe and secure, healthy and well, able to participate fully, connected to culture and community and to have equal rights and opportunities.
With input from Victorians. And proud of it campaign by the Government of Victoria
- Advertisement -
Share
WhatsApp
Facebook
Twitter
Linkedin
Previous articleBreathe your way to better health
Next articleSunny side up!