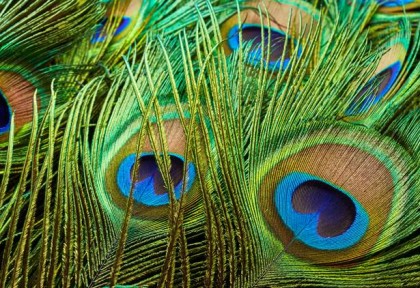 The beauty of peacocks, with their dazzling multi-coloured feathers, has always provided inspiration to poets and artists in their creative work.
Now, peacock feathers have inspired a team of Chinese scientists to develop a new way to colour fabrics without the use of traditional dyes that enter streams and rivers, causing environmental pollution. An added advantage: these colours don’t fade easily.
The non-polluting greener method to colour textiles using “Three-dimensional colloidal crystals” has been described by Bingtao Tang and colleagues at China’s Dalian University of Technology in the American Chemical Society (ACS) journal Applied Materials & Interfaces.
Traditional dyes and pigments used on textile fabrics are chemical colours that produce their visual effect by selectively absorbing and reflecting specific wavelengths of visible light.
On the other hand, the colours of peacock feathers (or butterfly wings) result from physical interactions of visible light with “microstructures” on the feathers that are periodic at the scale of the wavelength of light. According to the report, the Chinese researchers wanted to find a way to colour voile, or semi-transparent, textiles by creating the “microstructures” akin to those on peacock feathers.
According to an ACS release, they accomplished this by developing a simple two-step process for transferring 3-D colloidal crystals – a structural colour material – to voile fabrics. Their non-polluting “dye”, apart from water, “included polystyrene nanoparticles for colour, polyacrylate for mechanical stability and carbon black to enhance colour saturation”.
“Using colloidal crystals with colouring functions for fabrics has resulted in significant improvements compared with chemical colours because the structural colour from colloidal crystals bears many unique and fascinating optical properties, such as vivid iridescence and non-photobleaching,” the report said.
The coloured voile fabrics, according to the scientists, exhibit high colour saturation, good mechanical stability, and multiple-colour patterns that are printable. “Testing showed the method could produce the full spectrum of colours, which remained bright even after washing the fabric.”
They conclude that colloidal crystals are promising potential substitutes for organic dyes and pigments because they are environmentally friendly.