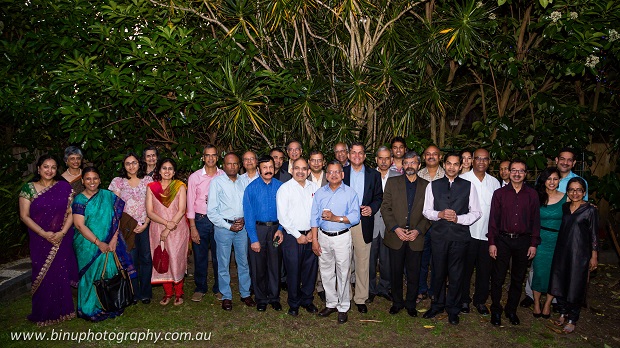 Did you know that 24 per cent of the scientists at NASA regard the Indian Institutes of Technology (IITs) as their alma mater?

This statistic was mentioned at a recent conference organised by the IIT Alumni Association of Australia (IITAA) by the Consul General of India (Sydney) Sunjay Sudhir, a former IITian himself.

The conference, held in association with the education chapter of the Australia India Business Council, was aimed at forging pathways for IITs to connect with universities here. It saw a number of visiting IIT top brass interact with their counterparts at Australian universities in a bid to explore increased research partnerships.

The IIT visitors included one director (Prof. U.B. Desai of IIT Hyderabad) and four deans (Prof. Amar Samanta of IIT Kharagpur, Prof. Sandeep Singh of IIT Roorkee, Prof. Dheeraj Sanghi of IIT Kanpur and Prof. Aloke Ghosal of IIT Guwahati). Over the course of the conference at the MLC Centre, they made presentations about their own institutes, their particular research strengths and their visions for the future.

Two panel discussions held at the event also threshed out the role of IITs in cutting edge research and how Australian universities could harness them in partnership; Australian case studies and best practices on research partnerships, and the possibility of exchange of faculty and students between IITs and universities here. The discussions were organised by Muralidharan, chairman of the AIBC Education chapter.

Over the next three days, the visitors from India travelled to universities here in NSW as well as in Victoria and in Canberra.

The research relationship between India and Australia has grown by leaps and bounds in recent years. Prime Minister Tony Abbott pledged on his recent trip to India, $20 million for the Australia India Strategic Research Fund. In October, the Australia India Council announced funding for 13 specific collaborative research projects that will mutually benefit the two countries.

Indian Prime Minister Narendra Modi’s ‘Make in India’ campaign will have potential as well to see this relationship develop further.

Prof. U.B. Desai, Director of IIT Hyderabad was pleased with the outcomes of the visit. He said, “We exchanged key opportunities (with our Australian counterparts) and had one on one meetings to pursue specific action items.”

Prof. Mark Hoffman, Pro Vice Chancellor of UNSW said, “The initiative helped to make UNSW more familiar with a number of the IITs and hopefully will lead to more reciprocal and collaborative agreements.”

Alumni can play a significant role in creating such links, says Samit Chandra, the Vice President of the IITAA.

“Creating such opportunities is particularly satisfying for us,” he told Indian Link. “We are indebted both to our alma mater and to our new home here, and our efforts can bring about fruitful outcomes for both.”

“The education initiative is our first large-scale endeavour and we hope to continue with it in the next few years,” Chandra, an IIT Roorkee alumnus, revealed. “We also have plans for an industry-related conference in the near future.”

As well, there are plans afoot for programs with PAN-IIT USA, a more global alumni organisation.

The IITAA was founded in 2003, but only became active in a professional sense five years ago, Chandra revealed, with momentum picking up two years ago as the numbers increased in Australia. The organisation recently part sponsored an IIT Roorkee race car project, in which a student team not only designed and fabricated a race car but also competed in an international competition, the FSAE Australasia held in Melbourne. The Indian team was adjudged the best in the fuel efficiency category.

The IITs are India’s most prestigious science institutions. “It may be the most important university you have never heard of,” a recent 60 Minutes segment on India’s premier technological university began famously.

It was in 1946 that the idea of the IITs first came up, as plans began to be drawn for the governance of a soon-to-be independent India. The founding fathers of the nation, realising the importance of tertiary technical institutions in the job of nation-building, suggested the setting up of the institutes across the country. The first IIT was established in Kharagpur in 1950. Within the next decade, the institutes at Delhi, Bombay, Madras and Kanpur came into being, and became highly regarded as educational institutions that trained young India’s scientists. Today there are 16 IITs in India, and many more institutes are awaiting recognition to become full-fledged IITs.