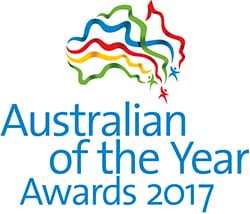 Each year Australia celebrates the achievement and contribution of eminent Australians through the Australian of the Year Awards.

The Australian of the Year Awards provides all Australians with the opportunity to recognise someone who makes them proud in four categories:

For the past four years, Tejinder pal Singh has dedicated the last Sunday of each month to feeding poor and needy locals of northern Darwin. After a gruelling 12-hour shift driving a taxi, Tejinder spends five hours cooking up a storm in his kitchen, preparing 80 kilograms of vegetarian curry and rice which he then serves as a free lunch. After arriving from the Punjab region with his family in 2006, Tejinder endured a racist tirade of abuse while transporting a passenger which inspired the humble man to break down the negative prejudice associated with turbans. Funding the feast each month from his own pocket, Tejinder attributes his generosity to his deep Sikh faith. His work has inspired three other groups to take up the cause to distribute free food to the homeless on Sundays. And the hungry and thirsty come flocking when they see Tejinder’s van, emblazoned with the sign “free Indian food for hungry and needy people.”

With an Australian heritage stretching back 130 years, Yasmin Khan creates connections and breaks down barriers to show how Muslims have made a great contribution to our nation. In 2005, Yasmin founded Eidfest – the largest Muslim gathering in Queensland to celebrate the end of Ramadan and to showcase Muslim diversity and cultures. A well-known speaker, Yasmin works with schools, the media and community groups to share insights into her religion and her life experiences. Yasmin represents her community on multiple reference groups, recently being elected as the Chair of the Ethnic Communities Council of Queensland, and is a multicultural ambassador for the AFL and Asian Cup, and was one of the first female cricket umpires in Queensland. A vocal commentator on domestic violence in multicultural communities, Yasmin has established a support centre for Muslim women and women from the Indian sub- continent, regardless of their religion. At the helm of many highly-successful events and community activities, Yasmin continues to demonstrate why diversity makes Australia a stronger nation.

The mastermind behind game-changing social enterprise Fiftysix Creations, Taj Pabari is a young inventor and social entrepreneur taking the world by storm. Describing his idea as the ‘LEGO of the 21st century’, Taj cleverly combines hardware, software and education, enabling children to not just consume the world we live in but to create it. The Fiftysix build-it-yourself tablet and coding kit is as easy as a puzzle and as engaging as a computer game, and is being used in schools around the world. Taj has partnered with the Foundation for Young Australians to build capacity in disadvantaged communities, and Taj and his team have educated more than 43,000 students in Australia and internationally. Balancing his education and entrepreneurial endeavours is not easy, and Taj wakes up at 4am every day before heading off to high school. Taj has big dreams to expand his social enterprise and has set a goal of educating one million kids by 2020.

View all finalists at Australianoftheyear.org.au