Once stung, twice as deadly 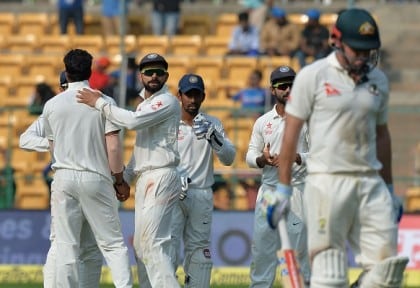 In the midst of an era in which the legitimacy of sporting events is perhaps subject to more scrutiny than ever, the current edition of the Border-Gavaskar Trophy has been a breath of fresh (albeit dusty) air. After two battering, bruising contests, the efforts of the players – both collectively and as individuals – has been all but immutable.
There has been controversy, of course – culminating in a deafening, acrimonious mid-series crescendo during the second Test in Bengaluru – but this is India versus Australia. There are no prisoners here.


Ahead of the Bengaluru Test, India had promised to avenge the humiliating defeat inflicted upon them in Pune – a defeat so unforgiving that only an Australian team could have pulled it off. But on Day 1 in Bengaluru, a ruthlessly accurate display of off-spin bowling by Nathan Lyon saw India crumble, losing 8 wickets to his spitting, biting guile.
Yet that was not the only snake at play. Borrowing a line from Dale Steyn, Lyon himself had earlier remarked that Indian captain Virat Kohli was akin to the head of the Indian snake – cut the head off, and the snake will fall.
And so it was on Day 2, a day on which a poor hour could have cost India the series, that Kohli stung. If India’s captain has, for the first time since taking up the mantle, gone missing with the bat, he has been pervasively omnipresent in the field.
Kohli has always had the remarkable, powerful ability to draw you in – whether he is training, batting, or fielding, it is him to whom your eyes will automatically avert. There is no doubt that he is, in every sense of the term, India’s captain.

But in Bengaluru, Kohli played the role of conductor – at times, of a circus, as evidenced by the moment Ishant Sharma engaged in a face-pulling contest with Steve Smith.
But predominantly, Kohli sat at the helm of the most primal display of theatre: the crowd surged and swarmed at the mere raising of his arms; the altos let out guttural roars even as the large swathes of school children chanted a more melodious tune; they swelled as one each time he raised his hand to his ear; and he was at once the villain and the protagonist, the most Australian cricketer on the field.

It is ironic to see inherently antagonistic players such as Ian Healy and Matthew Hayden speak out against his behaviour. Those two in particular played across eras in which Australian cricketers were systematically raised and instructed to dish out relentless personal abuse to their opponents – often threats of physical violence – and from all accounts available to us, none of Kohli’s sledging has been of that nature. If so, it must of course be condemned.

It is under Kohli’s uncompromising demands for excellence that India responded to the adversity in front of them, roaring back into the contest on Day 2 with relentless persistence.

India mounted another comeback on Day 3 through man of the match Lokesh Rahul and the technically brilliant Cheteshwar Pujara and Ajinkya Rahane. Ravi Ashwin delivered for India a final change of momentum on Day 4 – and it was not until the last 20 minutes of the match that you could say with any confidence that India would emerge victorious.


There is a risk that the Bengaluru Test will, in some corners, be remembered for all the wrong reasons. Inevitably, comparisons have been drawn with the infamous “Monkeygate” Test match at the Sydney Cricket Ground in 2008, which marks the last time the relationship between the two sides reached such a low ebb.
Since then, the IPL has healed many wounds – money has a curious way of doing that – but it was certainly refreshing to see the players care so much about a format of the game that is apparently so regularly at risk.

The main flashpoint in Bengaluru was, in many ways, the most inconsequential moment of the match. Plumb LBW in the second innings off an unplayable delivery from Yadav, and unsure whether to use Australia’s remaining DRS referral, Steve Smith consulted with his partner, Peter Handscomb, who gestured towards the Australian dressing room.
It is the first time since the inception of the DRS system that a player has pointedly sought guidance from staff with almost immediate access to video replays – and it is, unequivocally, against the laws of the game. And it is this which makes Handscomb’s gesture so unusual – if Australia had in fact never done this before, why would Handscomb be the first player in the history of the game to suddenly think to gesture towards the dressing room in that situation?

The majority of professional athletes – and certainly many of the Australian cricketers – would have reacted in the same manner as Kohli did in the face of the Australians’ apparent disregard for the rules: with outrage and a veritable barrage of choice words.  The hypocrisy of fans and former players such as Mark Waugh suggesting that Kohli should “let the umpires do their job” is self-evident and does not merit expansion.
Notwithstanding Kohli’s reaction, a systematic policy of “gaming” the DRS in clear violation of the laws of the game is far removed from an inadvertent glance by Smith towards the dressing room upon being pointed in its direction, which is more easily excused.

Kohli’s allegations that it was in fact a system of non-compliance should be investigated to the fullest extent possible, as they impact directly upon the integrity of the game.

For now though, we look ahead to the third Test in Ranchi. The emotional and physical toll on the players has been extreme, yet for all their efforts, they are back to where they started – the series is still level.