Since it began its operations in Australia, the company has received over 7,000 driver registrations in Sydney and Perth 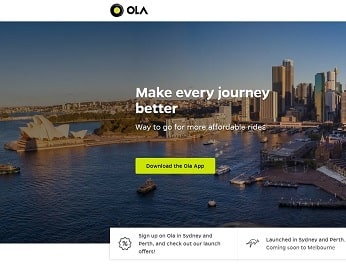 A month after starting its international operations in Perth in Australia, Indian online cab aggregator Ola said it has begun offering rides in Sydney through its local driver-partners.

“People of Sydney can avail the introductory offer for free rides. Customers can download the Ola app, register for an account and book their rides,” the city-based ride-sharing platform said in a statement here.

The company, on January 30, announced driving into Australia to foray into the international market to rival US-based Uber.

On February 14, Ola had begun offering two free rides to people in Perth city as a soft launch of its services with local partners.

Since it began its operations in Australia, the company has received over 7,000 driver registrations in Sydney and Perth, the statement said.

The company is yet to begin operating in Melbourne.

The Indian firm will be taking on Uber, the largest ride-hailing platform in Australia, apart from other online cab aggregators operating in the country like Australia’s GoCatch and Estonian Taxify.

Founded in 2011, Ola has been competing against Uber in the Indian ride-sharing market.

The seven-year-old Ola claims to have 125 million users in 110 cities across India.

SoftBank is also the largest shareholder in Uber, after the Japanese telecom firm recently bought 15 per cent of its stake.