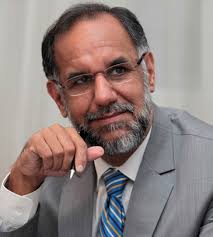 Reading Time: 2 minutesNavdeep Singh Suri, who currently holds the role of Ambassador of India to the Arab Republic of Egypt, has been appointed as the next High Commissioner of India to Australia

Expected to take up his assignment shortly, Suri will be accompanied by his wife, Mani, and their two daughters, Manveena, a journalist, nd Jessleena, an avid environmentalist.
He will replace Acting High Commissioner Manika Jain who assumed the role after the departure of previous High Commissioner of India to Australia, Biren Nanda who recently left the position after three years in the role.
Suri’s innovative use of social media in public diplomacy has received extensive recognition and two prestigious awards and it is expected he will bring this new media approach to his role in Australia.
Suri was one of the first to introduce Facebook, Twitter and other social media channels as part of the Public Diplomacy efforts of the Ministry of External Affairs. He also pioneered a partnership with Google and YouTube. As Suri has written, “Our department’s expertize in a relatively new area was sought by others and one study placed us among the top five foreign offices in making effective use of social media.”
Suri joined the Indian Foreign Service in 1983 with his first diplomatic assignment to the Indian Embassy in Cairo where he studied Arabic. He then served in India’s diplomatic mission in Damascus before returning to New Dehli.
His move to the Indian Embassy in Washington in 1993 coincided with the Presidency of Bill Clinton and Suri was the political counsellor responsible for liasing with US Congress.
He served as the Deputy Chief of Mission in Dar Es Salaam and head of the press office at the Indian High Commission London before becoming India’s Consul General in Johannesburg.
He has also headed the West Africa and Public Diplomacy divisions at the MEA (the Indian equivalent to the Foreign Ministry).
A speaker of English, Arabic and French, Suri has a Masters degree in Economics. His English translations of his grandfather Nanak Singh’s classic Punjabi novels have been published by Penguin as ‘The Watchmaker’ and by Harper Collins as ‘A Life Incomplete’.