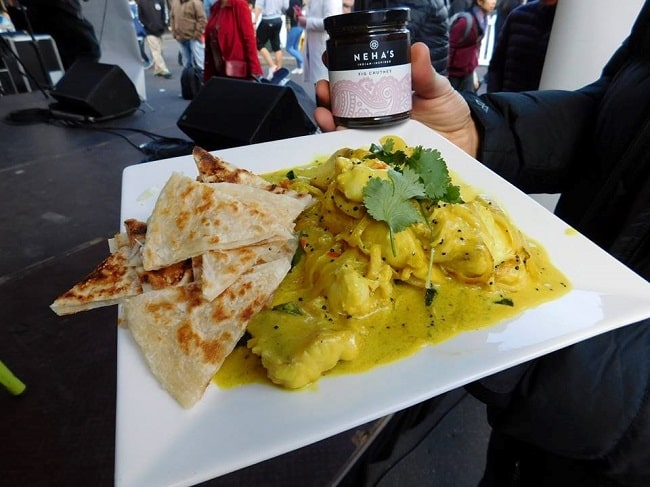 It all started when Himanshi Munshaw-Luhar visited the Queen Victoria Market not so long ago and saw a cultural festival in full swing.

Why don’t we have an Indian festival at this iconic venue, she wondered.
Only a few months later, she was standing on stage, welcoming visitors to the first Indian Festival at QVM. All around her were the sights, sounds and smells of India. People danced in gay abandon to Bollywood music, watched a classical performance with awe, sang along or tapped along to a Hindi classic, ate a hot curry, drank some ginger chai, and tried a bit of yoga.
Himashi had recreated an experience of India, right here in Melbourne.
Of course, creating experiences of India is not new to Himanshi: she does this for a living as head of luxury travel company Beacon Holidays and Foodie Trails, only, those experiences are the real thing.
She told Indian Link later, “The Festival excited me because it was not a typical community mela but one that I took outside of the community. It was a showcasing of India.”

“It was not a typical community mela but one that I took outside of the community. It was a showcasing of India”
Himanshi Munshaw-Luhar

On this rare sunshine-filled and rain-free weekend, QVM was decidedly different. Community visitors revelled in the familiar sounds of the Om Music Group; the jhatkas of dance troupe Naach Box who brought their A game and proved that Bollywood lives inside of all of us, and the pure classicism of the Bharatanatyam presented by the Kala Dyuthi Academy of Indian Classical Dance. Non-Indian visitors soaked in the atmosphere and joined in the dancing and the foot-tapping.

Meanwhile, a variety of businesses showcased their products and services, hoping to reach out to a wider audience.
Neha Sen from Neha’s Inspired Indian Cooking, one-time Masterchef contestant, reached out to all regardless of background. The smell of her masalas filled the air as she shared a recipe that has been in her family for generations, Fish Moille. Volunteers from the audience helped her out with chores she disliked the most, like chopping onions.
Another demo that went down well, was scrambled eggs with an Indian twist, always a winner with non-Indian diners.

To end, what better way than a relaxing yoga session with The Yoga Place. Interestingly, the event had kickstarted with yoga as well, but of the energising kind, thanks to Yoga Australia.
“It turned out to be a fantastic experience,” Himanshi said, looking back. She was hoarse with laryngitis and the strain of organising a mega event, but she was pleased with the result. “The traders were happy, the crowd was wonderfully mixed, and there was a variety of food on offer.”

She added, “India-based businesses used the platform to reach out as well, such as Goa Beer and Royal Enfield bikes. It was good to see the crowds getting involved in the activities.”
To involve the crowds with cultural experiences is a skill Himashi seems to have mastered well. Her company Beacon Holidays and Foodie Trails, launched in 2009, presents India experiences of a culinary as well as cultural kind. “We want to ensure that you use all of you senses to experience all of what India has to offer,” she said.
Himanshi hosts two tours to India, one to the north in January and one to the south in November.
“My guests stay in heritage and boutique hotels and we see the sights as well as make time for local experiences like going to the markets and trying local food. There is something unique about travelling with an Indian Australian who understands the best of both worlds,” she said.

It is this expertise that saw some 82,000 people come to QVM that weekend, way above average. No doubt the Indian Festival contributed to these numbers.
The festival looks set to become an annual event, with Himanshi revealing that the thinking cap is already on for next year.
– Nikita Kulkarni and Rajni Anand Luthra