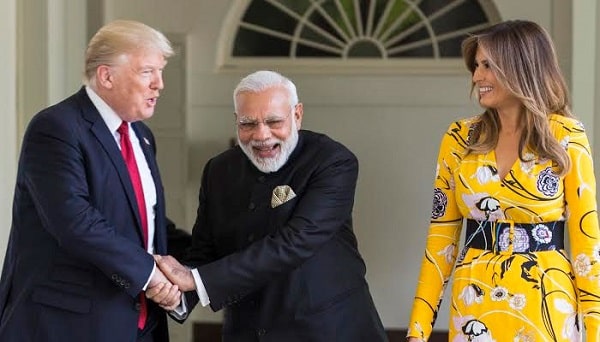 Punctuated by hugs, handshakes and effusive praise for one another, the meeting between the Indian Prime Minister and US President was at its cordial best, writes TARUN BASU

If hugs and handshakes are markers to personal and bilateral relationships, then the first get-to-know meeting between Indian Prime Minister Narendra Modi and US President Donald Trump seems to have been singularly successful.
The optics – as seen on TV – showed Trump proffering his hand of friendship to Modi – he called him a “true friend” more than once in the course of the day — after their meeting in the Oval Office, and then shaking his hand and hugging him at the end of their media appearance at the Rose Garden.

This was followed by more hugs and handshakes while seeing Modi off at the end of a four-hour interaction and working dinner, the first Trump has offered at the White House for a visiting leader since becoming President on January 20.
What is the takeaway for India – and the region – for this maiden Indo-US summit meeting in the Trump era? One, Trump wants to largely continue the “strategic partnership” and “Major Defense Partner” relationship with India that was begun by his Republican predecessor George W Bush and continued by Democrat Barack Obama; two, with sharp business instincts, with economy and jobs his primary motivation, Trump thinks he can do business with India.
He may have been especially buoyed with the $2-bn order for drones and what he called “(An) Indian airlines recent order of 100 new American planes, one of the largest orders of its kind, which will support thousands and thousands of American jobs” and the purchase of Westinghouse nuclear reactors. He wants India to import American natural gas and did not forget to add, like a true businessman, that the prices were being negotiated – “trying to get the price up a little bit”!
And, if India is ready to do business with US — something which China, Japan, Saudi Arabia and Qatar, among others, have learnt to use to their advantage — then the Trump administration is ready to accommodate Indian concerns and aspirations more than half way. India made a smart move – China had also done so earlier – by inviting Trump’s eldest daughter Ivanka to lead the US delegation to the Global Entrepreneurship Summit in India later this year. Ivanka has accepted to do so.

Trump has called the security partnership between the United States and India as “incredibly important” and said both nations will work together to destroy terrorist organisations and the radical ideology that drives them.
“We will destroy radical Islamic terrorism,” Trump said forcefully, an affirmation that may not have been exactly music to Pakistani ears. “Our militaries are working every day to enhance cooperation between our military forces. And next month, they will join together with the Japanese navy to take place in the largest maritime exercise ever conducted in the vast Indian Ocean.”
China had already sounded a veiled note of warning over the activity of “non-regional forces” and frowns upon the joint military activity of the kind that the US, Japan and India are going to undertake. China also does not like the formulation Indo-Pacific – as opposed to neutral Asia-Pacific – and would not be happy with the joint statement that talks about the “importance of respecting freedom of navigation, overflight, and commerce throughout the region” while calling upon “all nations to resolve territorial and maritime disputes peacefully and in accordance with international law.”
Trump concluded by saying that “I truly believe our two countries can set an example for many other nations, make great strides in defeating common threats, and make great progress in unleashing amazing prosperity and growth.” This was seen as not just standard officialese but, embellished with such Trumpesque epithets like ‘amazing’, carry the imprimatur of the President himself.


From a visit that had begun with “low expectations”, given the unpredictability factor of the current President, the Indians have more than one reason to smile. They prepared well, read astutely the signals from the White House, especially issues and emotions that move and motivate Trump, and set the right frame for the meeting by making big-ticket business moves with the US that Trump could brag as job generating.
The US responded in equal measure by making the pre-summit announcement of naming Syed Salahuddin, chief of Kashmiri militant group Hizbul Mujahideen, as a “global terrorist” and putting counter-terrorism cooperation, including in Kashmir, at the nub of their bilateral relationship. This could not be good news to either Pakistan or the separatist elements in Kashmir.
Pakistan, especially, has been singled out for admonition with the joint statement calling on Pakistan “to ensure that its territory is not used to launch terrorist attacks on other countries” and also to “expeditiously bring to justice the perpetrators” of terror attacks on Mumbai, Pathankot and others, putting the onus on cessation of terrorism squarely on the shoulders of Pakistan.
With IANS
- Advertisement -
Share
WhatsApp
Facebook
Twitter
Linkedin
Previous articleCensus 2016 shows Australia’s changing religious profile, with more ‘nones’ than Catholics
Next articleAustralia’s health care system is fine…