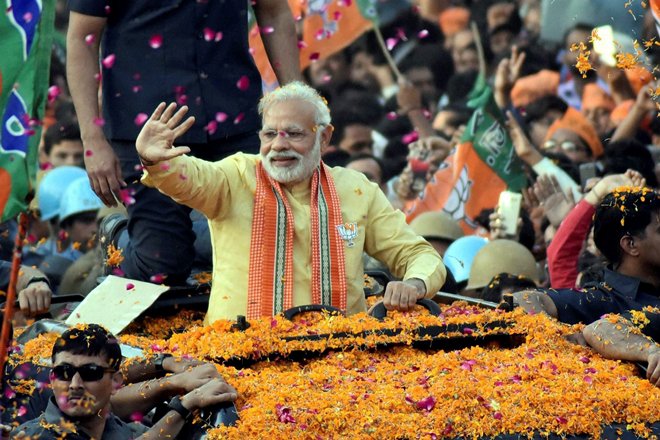 The sweeping victory of the Bharatiya Janata Party (BJP) in Uttar Pradesh has shown that Narendra Modi has recovered much of his popularity of 2014, writes AMULYA GANGULI

However, since this recovery is largely confined to UP and Uttarakhand, and is not reflected in Punjab and Goa, it is obvious that the magic of the last general election with its much wider ambit has eluded him.

Even then, considering that UP carries much greater political weight than any of the other four states which went to the polls, the BJP’s success will go a long way to eradicate the memories of the series of defeats which it suffered in 2015 and 2016 when it lost in six states, winning only in Assam.
The party will also be relieved that the outcome has belied the dire prognosis of a number of eminent economists about demonetisation. Instead, the dramatic measure of last November has shown that the people, by and large, haven’t lost faith in Modi’s ability to take the country in the right direction where the economy is concerned.
Their quiet acceptance of the inconveniences of the cash crunch has now been reflected in the UP and Uttarakhand results.
That is not to say that the inadequacies of the BJP’s opponents did not play their part in ensuring the party’s win. Foremost among them in UP was the young Chief Minister Akhilesh Yadav’s inability to match the Prime Minister’s development dreams.
Given the choice between the two in this respect, it is not surprising that the electorate chose the Prime Minister.

There is little doubt that Akhilesh was undermined by his own family not only in the last few months, but virtually right from the time he became Chief Minister as his father and uncles gave him little leeway, which is why he was known as half a Chief Minister through much of his tenure.
Although Akhilesh managed to wriggle out of Mulayam Singh’s stranglehold just before the elections and promised to rid the Samajwadi Party (SP) of its taint of being a backward-looking caste-based party of anti-socials, it wasn’t enough to convince the voters.
The SP’s alliance with the Congress also did not work. It is difficult to say who pulled down whom. But it is clear that the 132-year-old Grand Old Party of yore hardly has any committed supporters in a state which once gave the country four Prime Ministers — Jawaharlal Nehru, Lal Bahadur Shastri, Indira Gandhi and Rajiv Gandhi — from the Congress as also V.P. Singh of the Janata Party.

In contrast, the party’s present-day leader, Rahul Gandhi, has shown himself to be incapable of providing inspirational leadership because of his immaturity, as former Delhi Chief Minister Sheila Dixit has said.

As a result, although the BJP did not have a credible local leader in UP and is believed to be toying with the idea of asking Union Home Minister Rajnath Singh to fill the vacuum, it did not have any difficulty in winning.
Although it was Modi’s popularity which carried the party past the winning post in UP and Uttarakhand and gave the Congress a tough fight in Manipur, it wasn’t enough of an attraction for the electorate in Punjab and Goa, where the Congress showed that there was still life in the old warhorse.
The Punjab outcome in the Congress’s favour was not surprising in view of the Akali Dal-BJP combine’s manifold failures in the fields of the state’s financial travails and the drug problem among the youth.

The Congress was also fortunate in having in former Chief Minister Amrinder Singh a formidable figure who could secure the trust of the voters. In this context, the Aam Admi Party (AAP) did not have anyone even remotely comparable.

The AAP’s failures in Punjab and Goa will, therefore, puncture its pretensions of being able to fill the vacancies created by the Congress’s decline in large parts of the country.

Like the AAP, the Bahujan Samaj Party (BSP), too, has failed to live up to the expectations of it feisty czarina, Mayawati.
Although she also started chanting the development mantra, which is apparently being seen by politicians of all hues as the winning formula ever since Modi’s 2014 success, the continuing perception of the BSP as a Dalits-only party cannot but have let her down.
Seeing the writing on the wall after the exit polls, Akhilesh had spoken of repairing the SP’s ties with the BSP to prop up a “secular” front. But such a fragile opportunistic ploy could hardly succeed at a time when governments are expected to deliver.
The vote for the BJP in UP is based almost solely on this expectation of the new administration curbing lawlessness apart from initiating development projects. It is in this respect that U.P. is different from Bihar where the BJP could not make any headway in 2015 because Nitish Kumar was seen to be more capable in the matter of restoring law and order than Akhilesh.