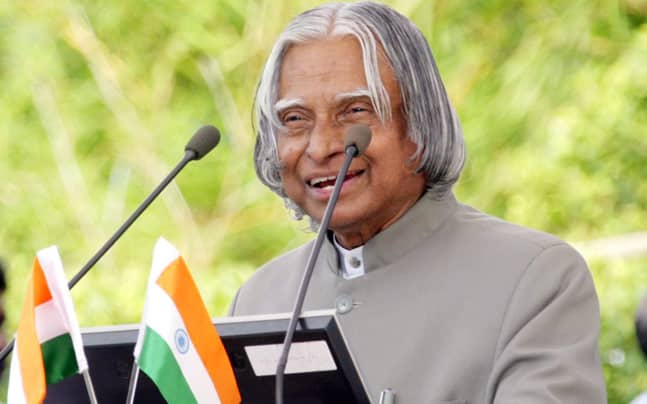 APJ Abdul Kalam was doing what he loved best, when he collapsed on 27 July.
He was speaking to a bunch of students.
An enthusiast till the end for sharing ideas with students and youth, he was delivering a lecture at the Indian Institute of Management at Shillong when he collapsed and died in hospital shortly afterwards.
His last tweet, sent out a few hours earlier, sounded enthusiastic. “Going to Shillong to take course on Livable Planet earth at IIM.” (His handle @APJAbdulKalam, describes him as “Scientist, teacher, learner and writer. Served as the 11th President of India (2002-07). Working for an economically developed nation by 2020.”)
Popularly known as India’s “Missile Man”, Avul Pakir Jainulabdeen Abdul Kalam crowned an illustrious scientific career with a term as India’s first citizen. He was recipient of India’s highest civilian honour, the Bharat Ratna, in 1997.
As a scientist, academic, writer and president, Kalam was full of ideas on how to solve India’s problems – on bridging the rural-urban divide through his pet concept of PURA or “Providing Urban Amenities in Rural Areas – for empowering villages, and also to use solar power, nuclear energy and bio fuels in a big way to tide over India’s energy needs.
Born on October 15, 1931 at the Hindu pilgrim town of Rameswaram in Tamil Nadu, Kalam specialised in aeronautical engineering from Madras Institute of Technology and in 1958, joined the Defence Research and Development Organisation (DRDO).
He moved to the Indian Space Research Organisation (ISRO), where he was project director of India’s first indigenous Satellite Launch Vehicle (SLV-III), which successfully injected the Rohini satellite in the near earth orbit in July 1980 and made India a member of the exclusive Space Club.
In his two-decade stint in the space agency, he was responsible for the evolution of ISRO’s launch vehicle programme, particularly the PSLV configuration.
He rejoined DRDO in 1982, and planned the programme that produced a number of successful missiles, earning him the “Missile Man” nickname. He took up the responsibility of developing indigenous weapons as the chief executive of the Integrated Guided Missile Development Programme (IGMDP). He was responsible for the development and operationalisation of Agni and Prithvi missiles.
From 1992 to 1997, Kalam was scientific adviser to the defence minister, and later served as principal scientific adviser (1999-2001) to the government with the rank of cabinet minister.
He played a prominent role in the country’s 1998 nuclear weapons tests, Pokhran-II, which established Kalam as a national hero.
He also gave thrust to self-reliance in defence systems by progressing multiple development tasks and mission projects such as Light Combat Aircraft.
In 1998, Kalam put forward a countrywide plan called Technology Vision 2020, which he described as a road map for transforming India from a less-developed to a developed society in 20 years, and called for, among other measures, increasing agricultural productivity, technology as a vehicle for economic growth, and widening access to health care and education.
From November 2001, Kalam was professor, technology and societal transformation at Anna University, Chennai.
He wrote four books, Wings of Fire, India 2020: A Vision for the New Millennium, My Journey, and Ignited Minds: Unleashing the power within India.
One of the most distinguished scientists of India with the unique honour of receiving honorary doctorates from 30 universities and institutions, he was awarded the Padma Bhushan in 1981, and Padma Vibhushan in 1990 before the Bharat Ratna.
IANS