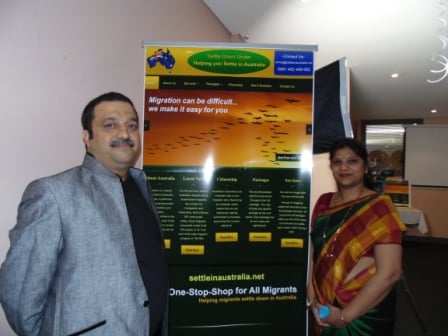 Reading Time: 3 minutesNew arrivals will benefit from personal guidance and consultation to help them settle in, writes Preeti Jabbal

One of the ‘biggest journeys of hope’ is when one migrates to another country. Whatever the motivation, migration is a complicated emotional and physical journey full of uncertainty and expectations. Being uprooted from the familiar and confronting the unknown can be daunting. However if there is help available, adapting to a new environment and lifestyle can be relatively easier. A new website/service was launched recently in Melbourne offering assistance to new migrants settling down in Victoria, as well as across Australia, through personal guidance and consultation. According to Aroop Shukla the brain behind this unique concept, the aim of settleinaustralia.net is to enable migrants to integrate and assimilate in Australian society ‘like a duck takes to water’.
The website and service was officially launched at Tandoori Junction Indian Restaurant in Glen Waverley recently, and was attended by a number of dignitaries predominantly from the Indian community along with representatives from south Asian communities like Fiji, Singapore, Malaysia and China. Consul (SCWO) Rakesh Kawra was the chief guest along with Vasan Srinivasan, President of the Federation of Indian Associations of Victoria (FIAV). Both offered their ongoing support to Aroop and his wife Sharmadha and wished them well for the success of this ‘much-needed service’.
Other guests included Usha Sharma, ex-VMC Commissioner; Arun Yoshit from Cambridge International; Thomas Joseph, Vice President of FIAV; Param Randhawa, former head of international marketing and manager of International Business Development from Box Hill TAFE; Neeraj Nanda, editor of South Aisa Times; and President of Maharashtra Mandal, Manalini Kane. Ambrish Deshmukh aka Adi was the charming MC for the evening.
Resettlement often involves adapting to a new environment, language, culture, society and lifestyle. Through this service Aroop and Sharmadha Shukla wish to make the process easier for people.
“Despite the innumerable websites and information available to people, they still need someone to ‘hold their hand’ and guide them through the entire process of finding a job, accommodation, school for their children and even something as simple as opening a bank account,” said Aroop as he explained the options available. “We have a package to suit all needs. I have been in Australia for over 12 years now and like everyone else, I have lived and learned through my migrant experience. I have also helped heaps of people in a personal capacity with the settlement process. This is an extension of the same service. I am very confident that the intellectual property that I have will help people save money, time and effort,” he added.
During the launch several prominent members of media and community spoke about how such a service will fulfill a need not yet addressed. All of us have our own migrant stories to share and we all wish to help others, however, it is not always practical and possible to do so. While for many of us it is difficult to adapt to a new environment, a vast majority of immigrants eventually find their feet. A service like the one offered by the Shuklas is likely to expedite the settlement process. According to Aroop, the sooner people settle-down in Australia the easier it will be for them to focus on living day-to-day and will reduce the dependence on government resources, services and facilities.

Photo caption: Aroop and Sharmadha Shukla (ONLY IF NEEDED, AS MOST REPORTS FOR MELBOURNE RUN WITHOUT CAPTIONS)